There is nothing cuter than a baby alpaca!

Yesterday was one one my best days since we've been back in New Zealand.  Why, you ask?  Because we met a great guy named Marijn [ma-rain] who struck up a conversation with Rich the other day.  Marijn came by the next day to talk "techno-geek" with Rich about navigation tools.


And to my good fortune, he picked up that I am an animal lover.  So, he and his wife Diana
graciously invited us out to tour their farm and meet the animals!!!  Oh what a day.  I wish so bad my friends Lisa and Vandy could have been there.  They are also huge animal lovers and would have enjoyed the visit.

Diana is a retired veterinarian.  They live on a 130 scenic acres up in the hills about 15 minutes from Marsden Cove Marina - where we are currently located.  Marijn has a monohull in the slip across from us.

Marsden is a clearance port for New Zealand customs.  We moved Pogeyan down here last Friday and planned to clear out of New Zealand Saturday morning.  Rich woke up at 4 AM Saturday morning and checked the weather for our passage.  A system in the tropics was projected to move closer to our destination.  It was best to stay put and wait for the next weather window.  So.... here we are patiently waiting at Marsden.

Back to the good stuff!  There were so many things about the farm that I loved but the most exciting was the 2 week old alpaca, Anna and her mother Isabell!!!  I didn't even know such a thing existed until yesterday.
From Wikipedia:

The alpaca is a species of South American camelid. It is similar to, and often confused with, the llama. However, alpacas are often noticeably smaller than llamas. The two animals are closely related and can successfully cross-breed


The baby was like a stuffed animal.  It was sooooo adorably cute and soft.  Even Isabell is incredibly cute.  Diana is trying to socialize Anna so she isn't afraid of humans.  Diana was able to catch her so that I could pet her.  Anna had such a graceful little prance, she moved like a little ballerina.  I would stay out in that field all day with her if I could.  Her mom, Isabell is a little bit leery of people so she hung back most of the time.  She walked close but not too close.  The male alpaca was in another field at the time because he had been bullying the sheep. 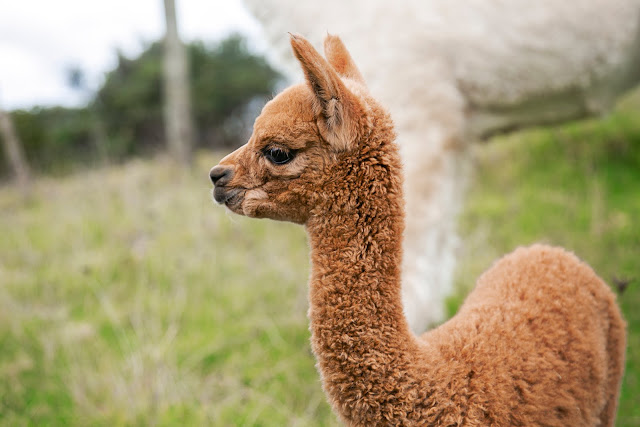 As we were walking away Anna started approaching Rich.  He knelt down and she walked right up to him and they just looked at each other for a while. 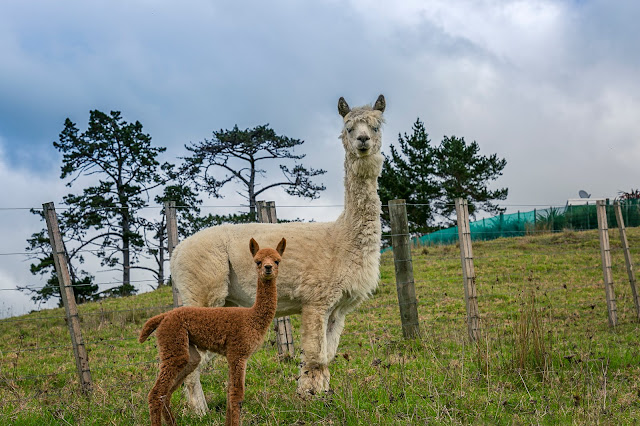 As we first got to the field Diana called her sheep.  She said it's quite unusual,to have sheep that will let you touch them.  She's raised a number of them from babies and they are conditioned to people.  Touching their wool is really cool.  It was much more dense and thick than it appears.  The sheep all had names and personal quirks.  For example Richmond would only take food from you if you wrap your arm around his neck and cup your hand with the food under his mouth!  See photo below.

Jen liked to take the food from me, throw it on the ground, then eat it!  I often see fields of sheep all over NZ when we drive around and am always wishing we could pet them.  Finally, it happened.

When we went to the chicken house I was delighted to see 60 white doves! When Diana was still working at a veterinary office people would bring in white doves.  They are purchased to be let go at events such as weddings and they have a horrible homing sense.  I'm not sure how people catch them but they brought them to the vet and Diana started taking them home.  Marijn built them a platform to sit on under one of the barn roofs.  And Diana built a lovely immense bird house for them.  I got to hold one of the doves who had been born there.  He would walk around at my feet and not fly away. 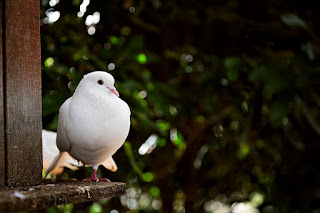 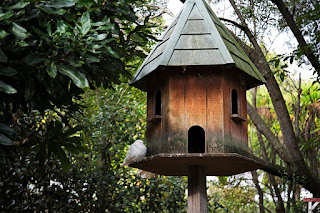 And it wouldn't be a farm without chickens.  These are Chinese Silkies.  It looked like they were wearing a Russian Ushanka!
And lastly, I regret to say I neglected to get photos of the 2 working Dogs :(  On arrival to the farm we went inside to have a cuppa (NZ for cup of coffee or tea) and I asked where the dogs were.  So, Marijn said "c'mon" and we left to go visit them.  And my camera was still laying on the counter.  I will be going back after sailing season is over and maybe once before we leave.  I will definitely get dog photos.

To view all the farm photos go Here