As we approached the island of Makogai we had to pass through a gap in the reef that encircles the island.  As often happens, we caught a fish just as we approached the reef.  This launched us into a routine where we head upwind, start an engine and drop the sails.  Oh, and we also had to avoid hitting the reef.  Rich dragged in the fish and it turned out to be a 25lb tuna. 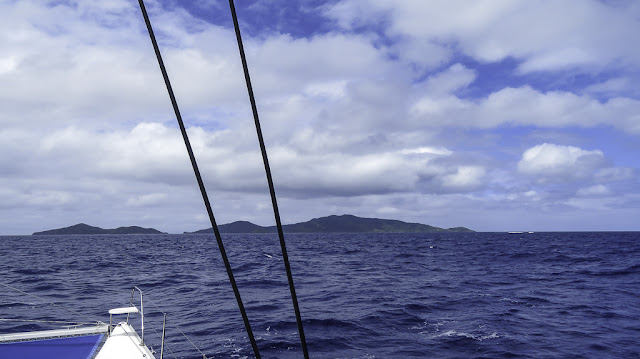 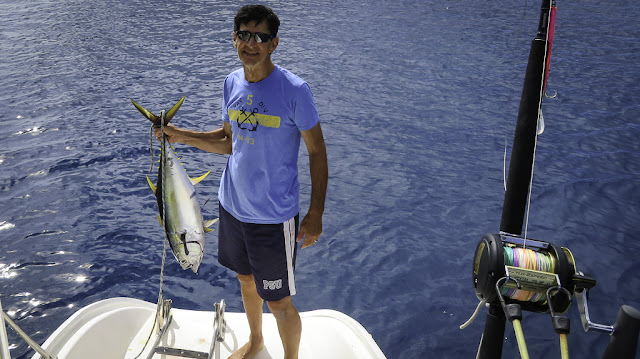 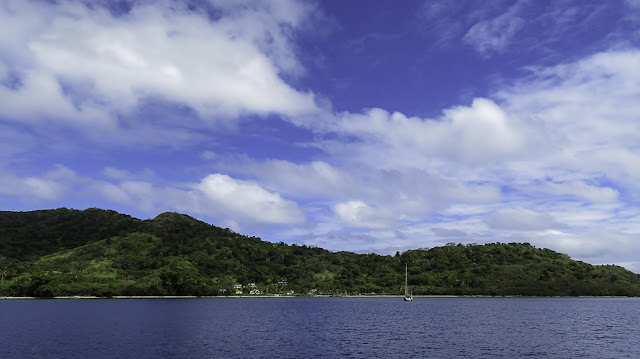 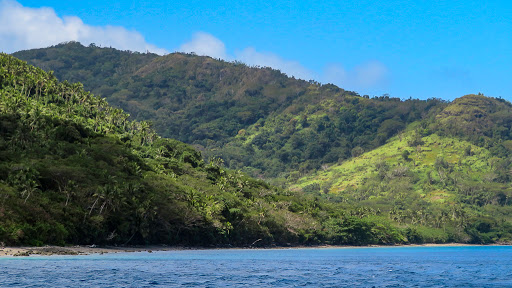 There were two boats already in the anchorage.  One had a British flag and the other was a Greek boat.  Rich fileted the tuna and then zipped around the anchorage in the dinghy handing out Ziploc bags with 2 kilos of tuna.  He spotted a local sitting on the end of the wharf and ran the last bag of tuna in to him.  This was how we met John who would be our gracious host, guide and good friend during our stay.

We cut our portion of the tuna into steaks and grilled them for dinner.  It was delicious.  I’m not a big fish fan but the grilled yellowfin was superb.  The other two boats told us the next day how much they liked it too.  The Greek boat, Filisi, brought us a fresh-baked loaf of raisin bread as a thank-you!

As per custom, we offered a gift of kava root to the village chief.  Each village has different traditions and variations on the sevusevu ceremony that marks acceptance of your gift and welcoming you into the village.  At Mokagai the ceremony was brief and informal involving a few minutes of spoken Fijian punctuated by claps.  At the end we were told that we were free to roam around, fish, pick fruit and swim anywhere just like a member of the village.

While still in New Zealand Rich saw a post on Facebook looking for yachts to transport reading books to primary schools in Fiji’s more remote islands.  Makogai has a small primary school on the other side of the island so we made arrangements to take some of the books over in our dinghy.  But, the weather and seas were too rough the next day so we geared up with backpacks and hiking boots instead.  John led us on the 5 kilometer hike across the island and I was so happy he carried my backpack.  It was heavy!  And he walked there and back in thin rubber dive boots!  He said it was no problem and that he does that hike every day. 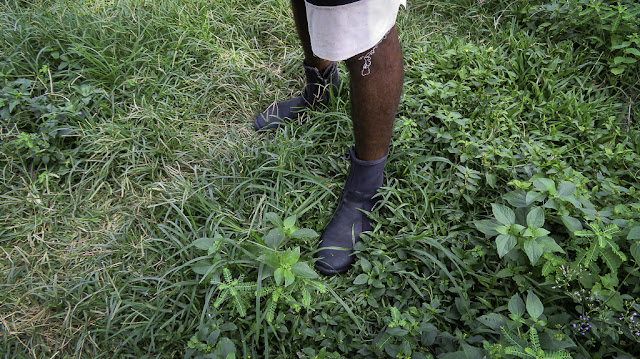 John's hiking boots aka dive boots.
All along the way John kept up a running commentary on the islands history, plants, and animals.  He pointed out a lot of edible plants and several plants that are good for medicine and treating wounds.  It was a long, hot tramp with really nice views at several points. 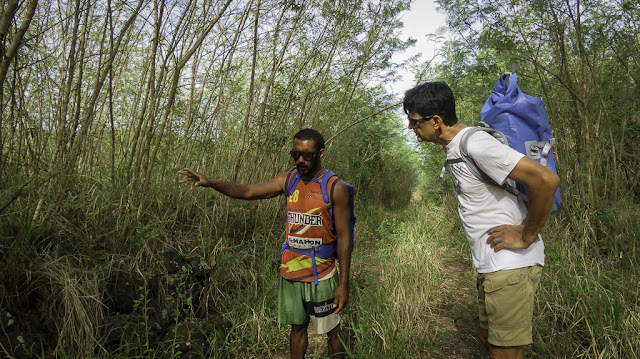 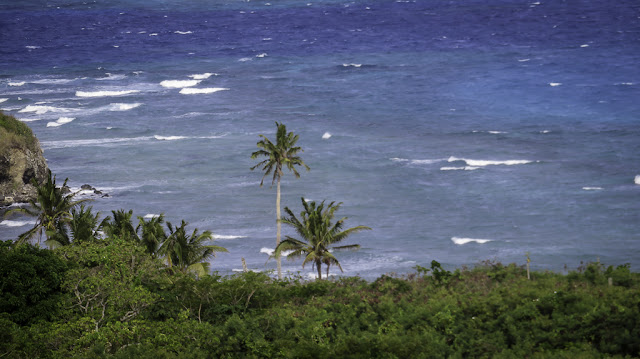 As we approached the school I saw one of the students spot us then run over to a large brass bell and start ringing it.  I guess that’s how they announce visitors.  The rough trail we had been hiking emptied onto a large flat open field that was perfectly manicured.  The six or so school buildings lined the edge of the field and were brightly painted and very tidy.  We arrived right at the end of the school day and stood attention during a brief flag ceremony. 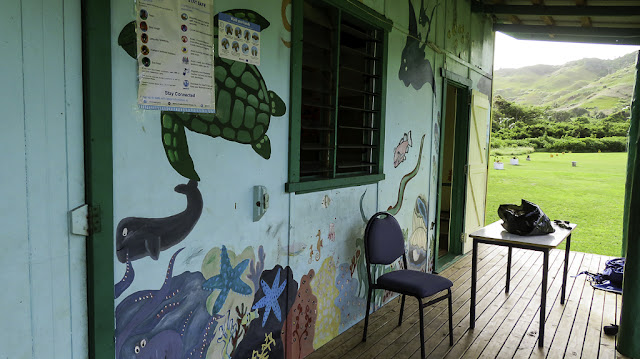 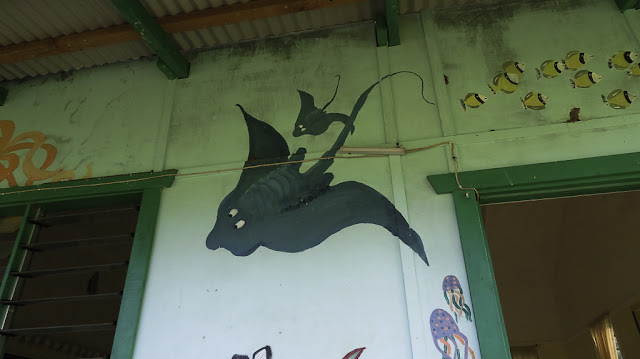 The headmaster gathered all the students together on the lawn and introduced us.  He then asked Rich to talk about how we arrived and where the books came from.  The books were then passed around so the kids could look them over. There are 31 students in the school broken into two classes, 1-4th grade and 5th -8th grade.  The kids were very attentive and they seemed to really like the new books. 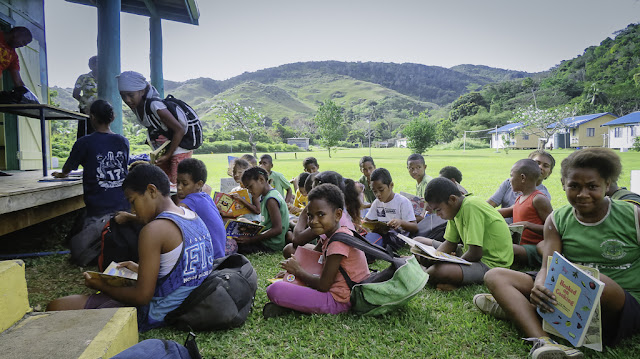 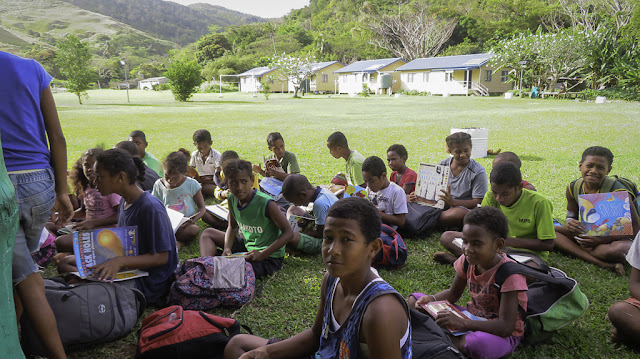 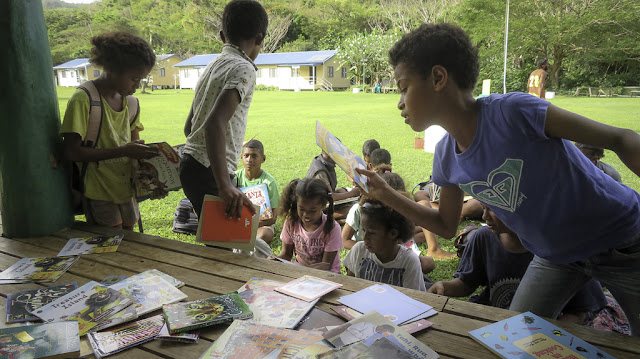 Several of the kids walked back across the island with us including John’s nieces and nephews.  I say they walked but actually they ran, jumped, joked, talked, and climbed trees picking fruit - like that hike was nothing!  They would run ahead of us and when we caught up they would be climbing down from trees with their shirts stuffed with something. They gave us 2 perfect papayas and introduced us to Tamarind – which was like a sour gummy bear.  John said the kids “snack” all the way back to their homes on the other side of the island.  When we last saw them they had stopped to eat coconut meat and drink coconut water.  They were opening the coconuts by pounding them on rocks! 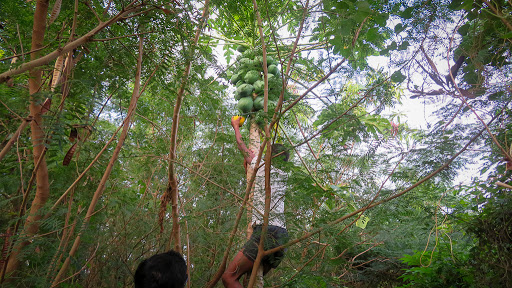