We untied our lines at 10 AM on June 13.  It was a beautiful sunny day and as we went down the Marsden Cove marina channel the Whangarei heads were straight ahead, with a layer of misty clouds passing over them. 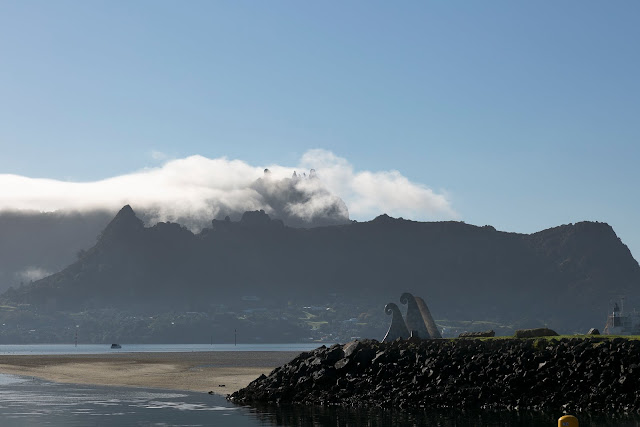 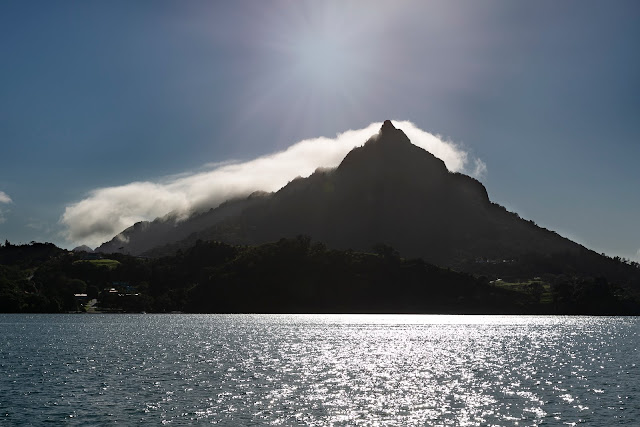 It took about 90 minutes to get over to Bream Heads - one of my favorite places to photograph.  The fog had cleared and the sky was bright making for nice photos.  I think this landscape is majestically beautiful.
Winds were too light to keep the sails full so we turned on a motor to keep moving.  We motor-sailed from Marsden to Poor Knights islands - a marine reserve a few miles off the coast.  By 5 pm we were past them and heading out to the open ocean. 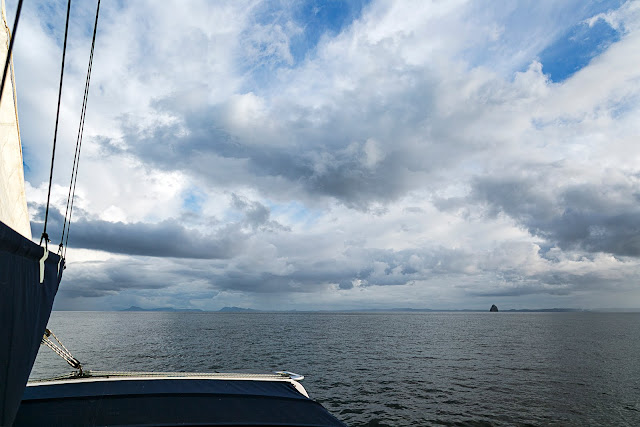 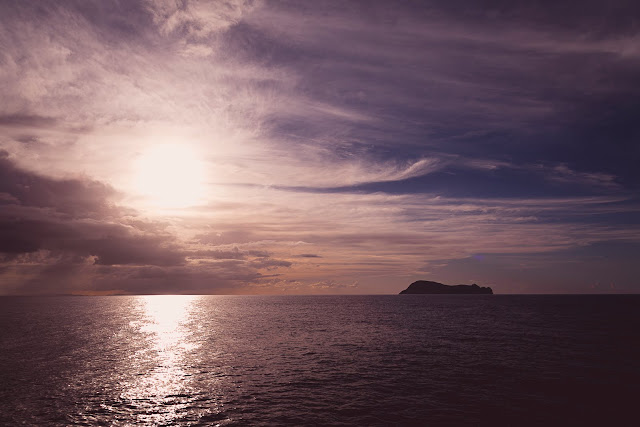 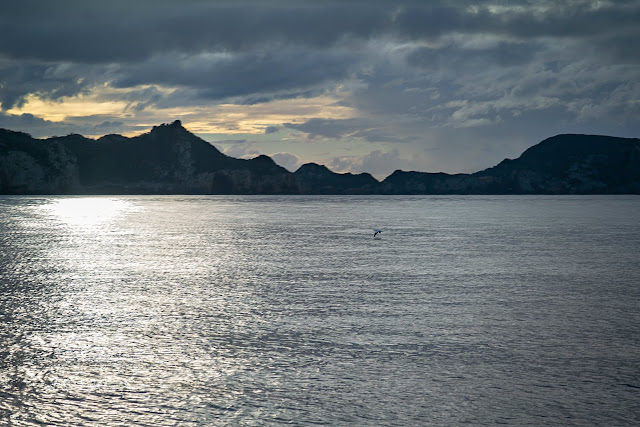 Rich dropped the sails about 4 pm due to lack of winds.  The seas are calm with a slow roll.  It feels great to be on the ocean again.  I really missed it.  I saw what looked like a whale about a mile off the coast of New Zealand.  It looked like a whale tail or maybe a large ray.  There are several species of whales around New Zealand - so it's likely I saw a whale.

We watched a recorded TV show together then I headed to bed about 8 pm.  Rich woke me up at 8:30 needing help with the head sail.  The outer jacket on the line had worn through and was fraying.  Rich installed a new line in parallel and cut the old one free.  After getting that sorted I went back to bed.

Rich woke me again at 2:00 AM with a hot cup of coffee in his hand and a hot ham/egg/cheese sandwich on a fresh croissant waiting in the galley!  There was a full moon and 2 of our friends (Scoots and Gone with the Wind) were close enough that I could see their navigation lights.  It was strange in a way.  The moon was covered by clouds and it was pitch black, but I could see 2 tiny green lights bobbing in and out of sight.  I’m so used to being all alone on passage out here.  Seeing 2 boats nearby was odd.  I tried to get a photo but it was too dark and the boat was moving too much.  The navigation software shows the nearby boats.  In the screenshot below we are the red boat.   The closest boat was 2 NM away and the farthest one was 4 NM away.  We were down to 5 knots on 1 motor.  Rich had put the sails up 3 times - but there wasn’t consistent wind.  Gone with the Wind was zooming along at 7 knots.  I couldn’t tell if they had a spinnaker up or 2 engines running.


Below is a zoomed out view where you can see New Zealand and Minerva Reef.  We left at 10 AM and I grabbed this screenshot at 3:00 AM the next morning.  We had made about 90 NM but it looks like we are barely off the coast of New Zealand!  It's about 800 NM from NZ to our destination at South Minerva Reef.
A nice feature of our AIS and navigation software shows our predicted closest point of approach (CPA) to other boats.   In the screenshot below, the software is drawing a little line between us and Gone With the Wind to show the point in the future where we would be closest to them.  This allows me to make early course corrections to keep us separated.
On Sunday, June 16 we are half way.  About 380 miles to go to south Minerva reef.  It's been raining since I got up at 2 AM.  We sailed all day Saturday and still are sailing.  Averaging about 7-8 knots.  For a while today the winds were so light Rich put up the spinnaker. 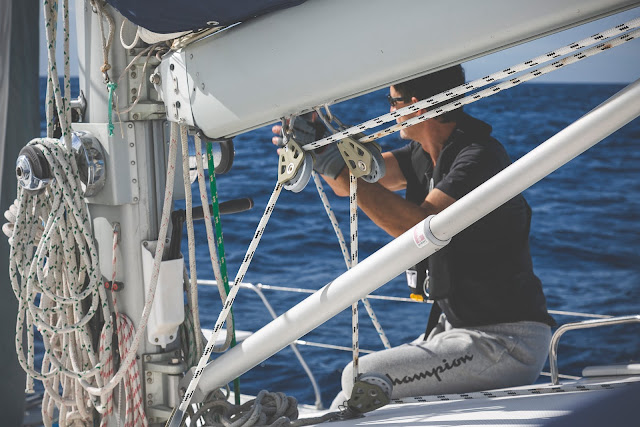 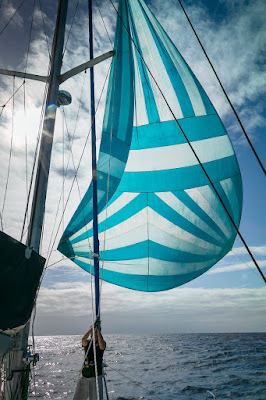 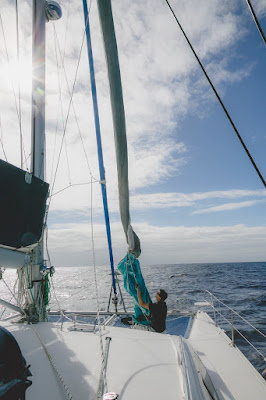 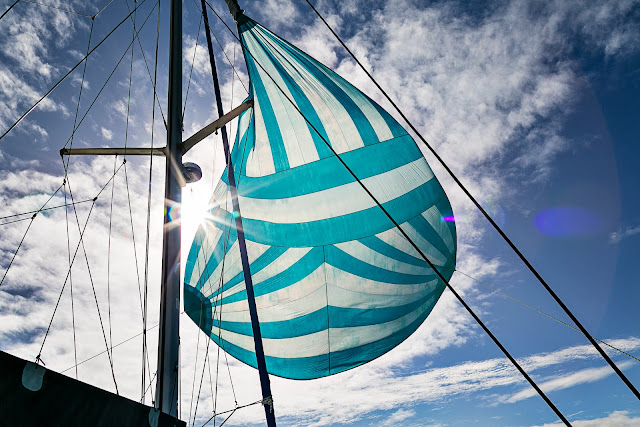 The winds increased dramatically throughout the day.  Below is a short video of Rich getting ready to reduce the size of the mainsail.  The technique is called reefing.  We started out with one reef and here he is adding the second reef since the winds are now above 15 knots.  We are now far enough North that long pants and shirts have been stowed away.  YEAH!!