Minerva Reefs are one of our all-time favorite places.  They are two submerged atolls hundreds of miles away from anywhere.  The only way to visit them is on a private yacht.

We estimate around 50 boats visit the reefs each year.  Most of these stop briefly or remain onboard since they are just taking a break from a long passage.   But for us the Minerva Reefs are a destination themselves.  This year we planned to visit them for at least two weeks on our way to Tonga.

We arrived at South Minerva at 9AM on June 19th, 2019 and we were excited to be back again.  After Winter weather in the States followed by months in a boatyard we were eager to get back in the water.   We were thrilled to see our friends Steve and Michelle on Citrus Tart already anchored  when we arrived!   We met them last year at North Minerva reef and were in the boatyard at the same time.

Bruce & Craig on Gato Go pulled in to Minerva South later the same day and our 3 boats remained at Minerva South for the next week.   Unfortunately, our stay at Minerva was affected by a massive stationary high pressure system stalled-out North of New Zealand.  Usually such systems move off to the East after a few days but this one stayed in place for over 3 weeks!  This led to high winds and generally unsettled weather for most of our stay.  We were able to go exploring Minerva South on 3 separate days but most of our time we were pinned-down on the boat.

There were a couple interesting items that washed-up at Minerva South this year.  A large channel buoy arrived from somewhere and it was slowly walking it's way across the top of the reef.   We could find no markings to identify where it originated.  It was only marked as "P6".   Rich sent some photos to friends in New Zealand who forwarded them to government agencies.


There was also a floating pile of heavy rope.  It was hundreds of yards of rope in a tangled mass about 6 feet square.   We think it might have fallen off a merchant ship.


South Minerva reef is a figure 8 shape forming an East and West lagoon.  The East lagoon is larger and has many good anchorages.  The West lagoon is smaller and not suited for anchoring.  At least not by a boat like ours.  We did find an entrance into the West lagoon and attempted a drift snorkel through the cut but the current and standing waves were too "sporty" for us.

Rich made this drone video with the drone hovering right above the West lagoon entrance.  He tried to slowly pan around to show all of Minerva South.

South Minerva Reef is low to the water.  At high tide the large seas wash right over into the anchorage.  North Minerva Reef sticks up a few feet higher and it makes quite a difference when the winds are blowing a steady 25 mph day after day.  After a week everyone decided to sail 20 miles north to North Minerva reef and wait there for the next good weather window to sail to the islands.  So, we moved up north too and got to meet Will and Margeaux on Kittiwake. 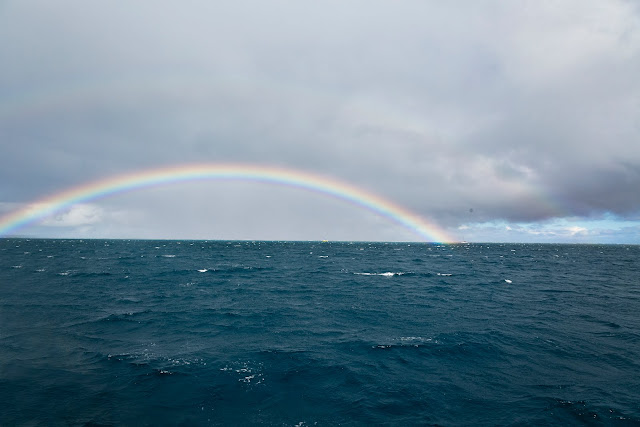 Gato Go is at the base of the rainbow on the right and Citrus Tart is under it!
There are 3 things Michelle really loves about Minerva Reefs.

Minerva has loads of these in all sizes and colors.  I have seen them from 3 inches up to 2.5 ft!  I've read that they can get up to 47" long and weigh up to 440 lbs.  And they can live to one hundred years!  They have beautiful unique colored mantels that come out to get sun.   There are hundreds of pinhole eyes in the mantle that detect light changes.  When your shadow falls on them they often close up.  I have to sneak up from the side to get a photo with the full mantel exposed.  The only color I haven't seen is reds and pinks.  Pretty much every other color is out there.  The solid black and solid navy ones are beautiful. 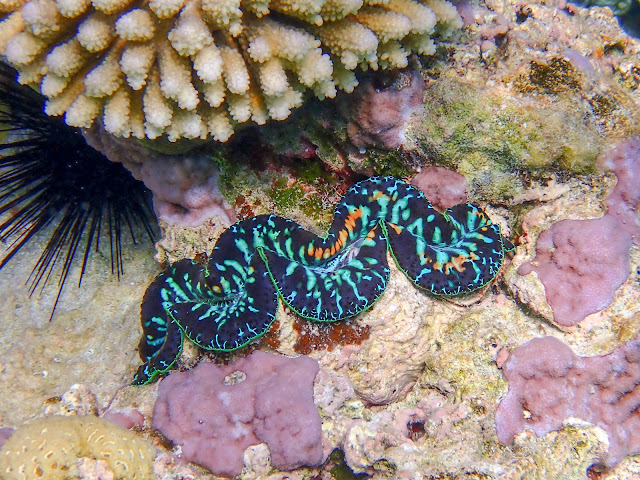 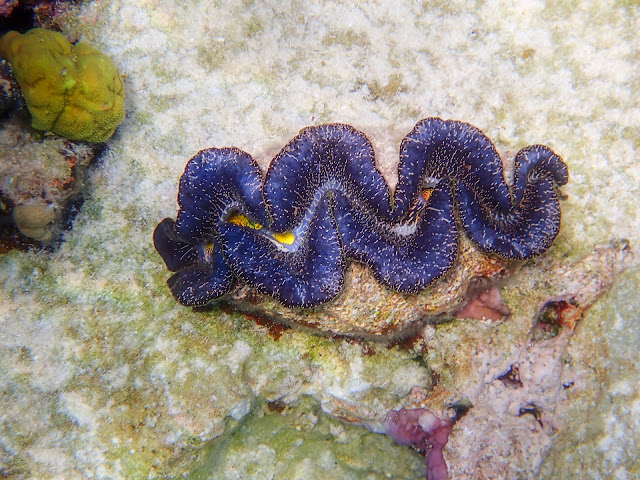 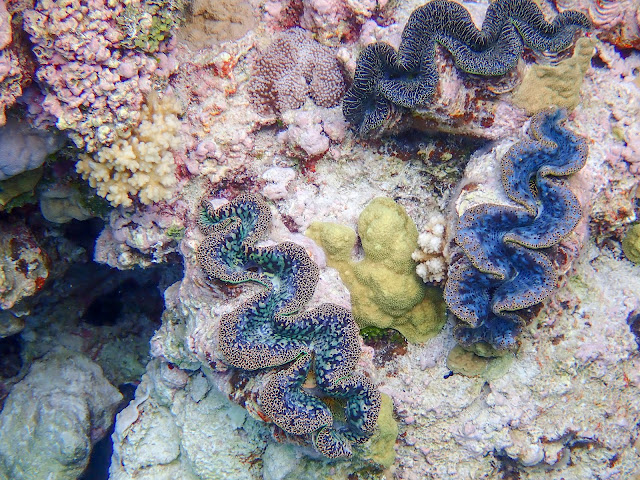 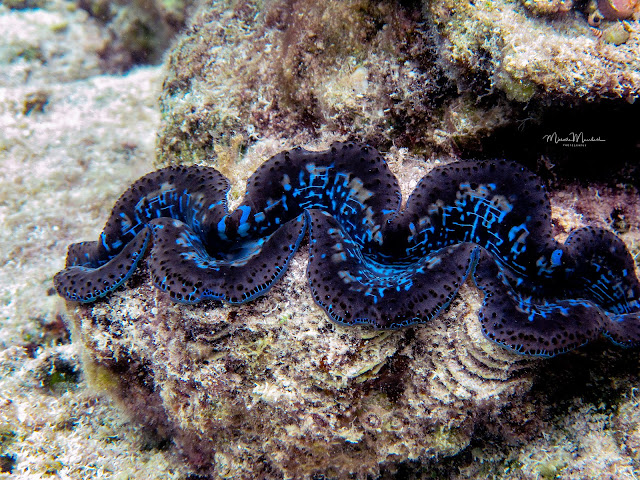 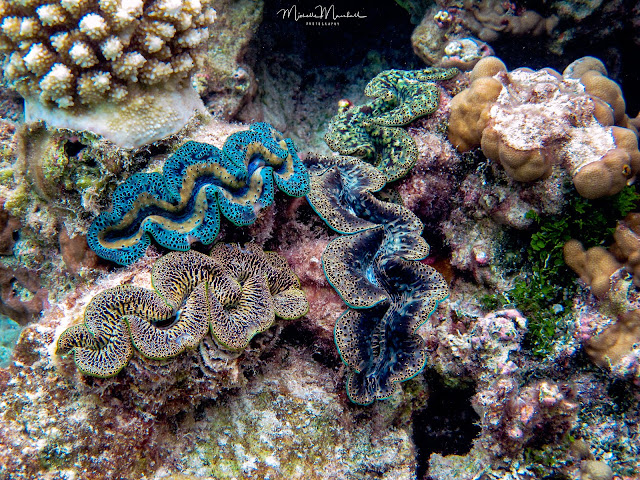 We've been diving for almost 15 years and this is the only place where sharks don't flee from us.  They go about their business patrolling the reefs while you are in the water and they stick around the entire time.  There are several species that are more territorial and "cop an attitude" when you trespass on their section of reef.  We have been told that if they come by 2-3 times and are twitchy you better get out.  That happened a few times last year.  But they mostly just seem curious about the odd swimming creatures in the rubber suits.  We have found our behavior and posture affects them.  When we are sauntering along enjoying the reef they are just as relaxed and ignore us.  When we are stiff, squared-off, and staring at them they tend to circle around, looking back at us.

The quickest way to draw the sharks is spearfishing.  The vibrations of the speared fish draw the sharks immediately.  They also show up quickly when we clean our catch on the back of the boat.  When we were at Minerva South it was pretty common to look down and see 1 or more sharks circling around.  On every snorkel and dive at Minerva our "friends in grey suits" are around.  Rich starting using that term last year.  He always checks out conditions and current before I get in.  He started using that term because it sounds better than "sharks!".

Regardless of the species we keep an eye on all the sharks while we are in the water.   We've learned a lot about their behavior and keep watch for threat behaviors.

There is a large tiger shark frequenting the entrance to North Minerva.  Our friends saw it last year but we have never seen it.  Will told us he saw a bull shark here as well.

And the real fun with the sharks is to hang a fish carcass off the boat transom from a piece of scrap rope.  I just love doing this.  We saw an entirely different side to these sharks when food was involved.  When we see them under water they slowly saunter around expending minimal energy.  But going after a fish they display amazing speed and power.  I saw one bend his body in half to make an instant turn.  When two or more are trying to get the same piece of fish they go absolutely berserk!  The amount of force expended is stunning.  The water is suddenly churning and splashing all over the place like a giant mixer has started.  I kept moving higher and higher on the boat trying to keep my camera dry.

Some sharks have an extra eyelid known as a nictitating membrane, which will fully protect the eye when feeding.  See photo below.

One day Will & Margo joined us for a day of fishing outside North Minerva Reef.  They went off in their dinghy to spearfish while we trolled up and down the outside of the reef fishing and making water.  An hour later they came back with a huge trevally and 3 lobsters!   We anchored the boat inside the reef so we could all go back out to snorkel.  They showed us a spectacular location with really healthy coral. 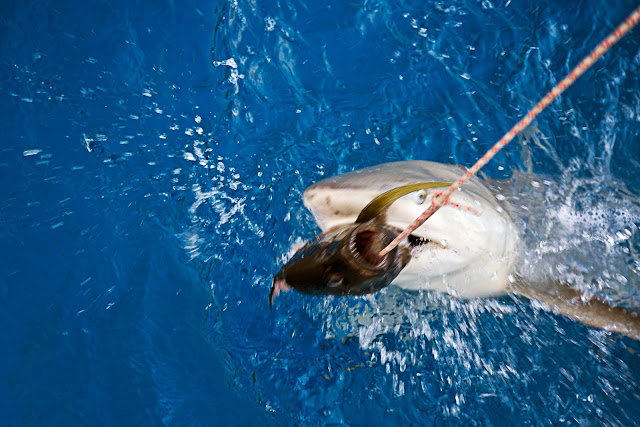 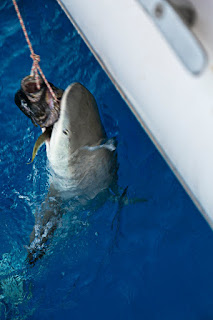 Both North & South Minerva have some amazing coral colonies.  The best ones are on the outside of the reef towards the open ocean.  The waves and swell are higher and getting there in the dinghy can be a challenge.  But it is totally worth it.  The breadth and scale of the coral colonies are fantastic.  There are huge coral heads 30-50 feet across, finger channels lined with coral, and there are huge flat expanses of coral.  It is so nice to see healthy coral and a lot of fish for as far as you can see.  A truly amazing place to be!  These are the best reefs I have ever seen.

We plan to stop at both reefs again when we sail back to New Zealand in November.  I can't wait to get back there. 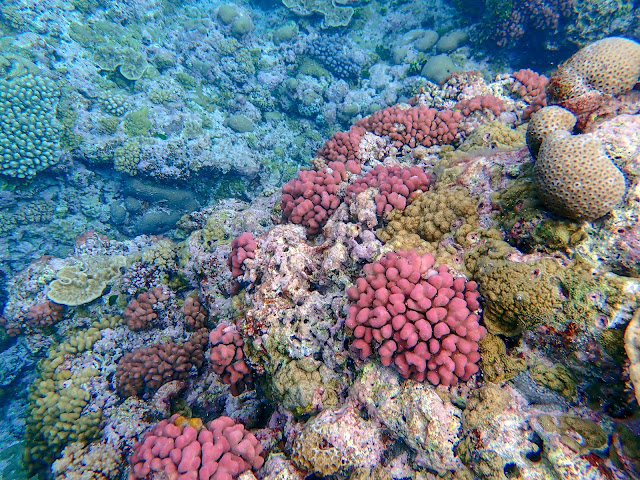 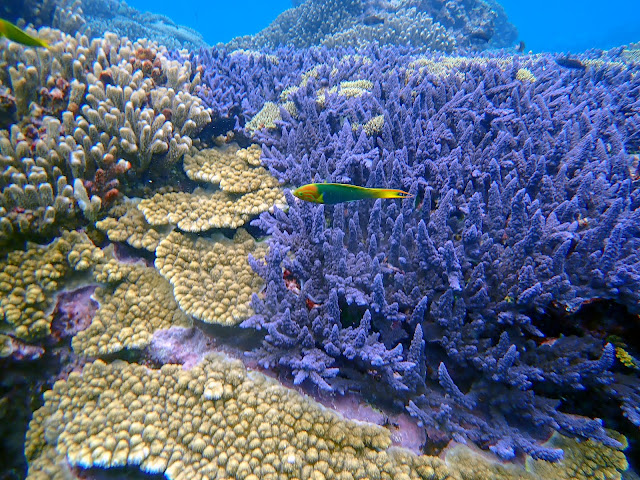 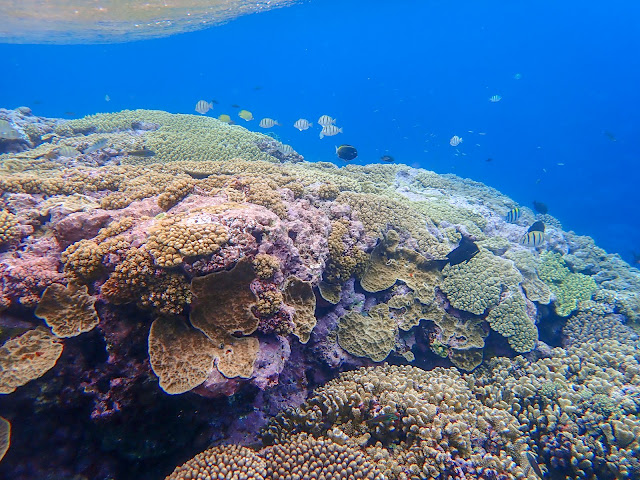