After clearing in to Tonga we immediately applied for a 4 month visa extension.  This involves handing over our passports and then checking back every few days to see if they are processed.  Last year we were told to come back in three days, but it took five.  This year we were told to come back in a week.  We were bummed becaause the best parts of Tonga are far away from the main island of Tongatapu.
For quite some time Rich had been wanting to explore a newly formed volcanic island that was 30 miles away. I was in!!!! We were so outta there! The winds were favorable to sail back in 3 days but not for the outbound trip.  We had to motor all the way . We left at 9 AM and arrived at 4:30 PM with enough light to move in close and look for a good anchoring location.
As we motored along on the flat rolling seat the ocean swell rose and fell in a slow rhythm making for a really nice ride.  As though there was a large air bed under us pulsing periodically. The drone video below shows it well.

Overview of the Area

Rich found no online accounts of people anchoring or landing on the volcano or the two neighboring islands - so we weren't sure what to expect.  Approaching the islands they didn't look very exciting because we couldn't see any details.  Just 3 large masses looming in the distance. At one point we thought we saw steam rising off the water as seen on the right side of the next photo.  But, as we got closer we could see it was mist coming off some breaking waves.


Up close the islands and the volcano were gorgeous. The setting was other-worldly and it was a treat to be there.  It was very peaceful place but definitely not quiet. The birds were making a heck of a racket.  There were hundreds in the air at any time.  Rich had several near misses flying the drone.  I found an article that says there are 18 species of land and seabirds on these islands.

The best way to understand the setting is from above. This overhead drone photo really shows the scale of this place and how it is all arranged. The island in the foreground is Hunga Tonga and in the background is Hunga Ha'apai. The volcano formed between them and joined them into one land mass about 3 miles long. The ash cone was much larger when it formed in 2014 but there's still quite a bit left. The ocean washed away a portion of the East side, flooding it with water and forming a lagoon.
There is a yellow sulfurous looking color in the ocean water near the ash cone.  You can see it in the drone photo below.  Not sure what exactly it is but it discolored both our lower sugar scoops after only 1 day!  And we weren't sitting in the yellow area either, we were off to the side where it looked blue.  We had to swim in the more yellow area though to get the beach on the far right of the volcano.  It smelt a little weird and the water tasted funny too.  It creeped us out a bit. 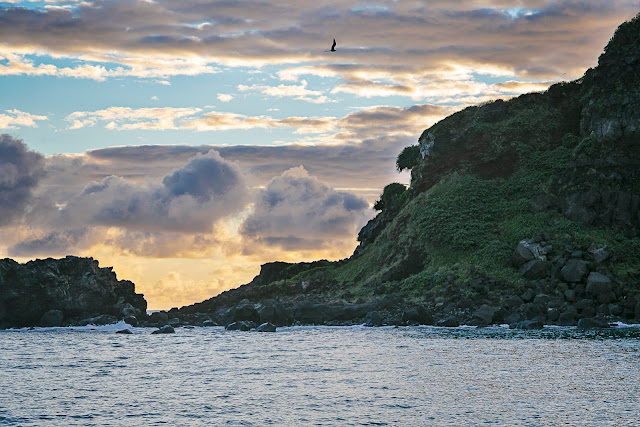 The volcanoe and new island formed by the 2014 eruption doesn't have a name.  But, the locals call it Hunga Tonga - Hunga Ha 'apai after the two islands it joins.

We  were the only boat there for two days and on our first night enjoyed a lovely sunset.  Before that we dropped the dinghy in the water, took the camera and motored along side the islands and volcano to get some close up shots.  This was also to figure how we could get on shore the next day.  The waves breaking on the beach were too rough to take the dinghy ashore so we planned to anchor out and swim in.  We were excited to get to bed and get up to go exploring the next day.


After we ate breakfast we jumped in the dinghy for a land excursion.  Our plan was to climb to the top of the volcano and walk along the ridge from one side to the other.  After anchoring the dignghy about 300 ft offshore, we swam into the beach.  Getting out of the water and up the beach was a bit of an adventure with the waves crashing on us.  The beach wasn't sand but small black pebbles.  So you couldn't get a foothold to climb out of the water.  Your feet sank and slid as you attempted to walk.  In addition, there wasn't a gradual slope up out of the water as is typical.  It was a an abrupt drop off into the water so it also made it hard to scramble up that small wall made of pebbles.

Once on shore we walked along the shoreline of Hunga Tonga then over the large expanse between it and the volcano base.  The shore of Hunga Tonga had large and small chunks of iron that were extremely heavy.  Contrasted with these lighter than air pieces of pumice stone.  They felt like styrofoam!
Here is a short video that shows the slippery pebble black beach.  Not your typical white sand beach in Tonga! 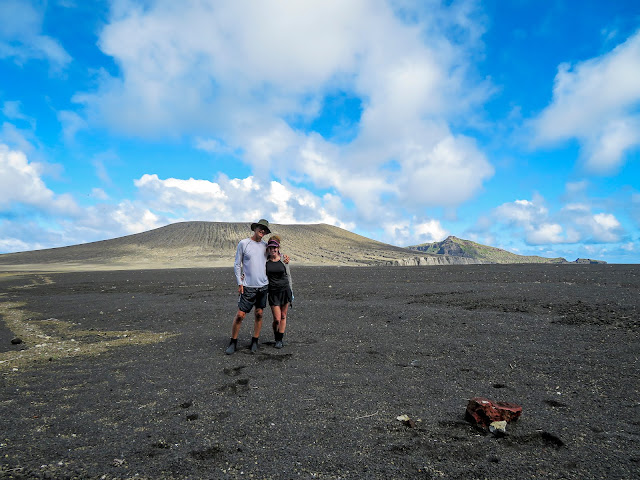 It looks like a short walk to get from the island over to the base of the volcano but it is actually quite a distance.  We trekked over in the intensely hot sun and tried to climb up to the top on one of the grooves.  Well that didn't work out so well.  The grooves formed deep trenches and the material was a gravel/dirt that was slippery.  So you couldn't climb up the walls at all.  Rich tried to walk up on the top of the grooves but they dead ended part of the way up and he couldn't get over onto the next one without climbing gear.

Here is a short video to give you an idea of the terrain.
After an unsuccessful attempt to get to the top of the volcano we instead walked around to the back of it.  As we rounded the corner we saw the ocean on the windward side of the island.  It was roaring with breaking huge waves on the beach.  A beautiful blue color with the same black pebble beach. 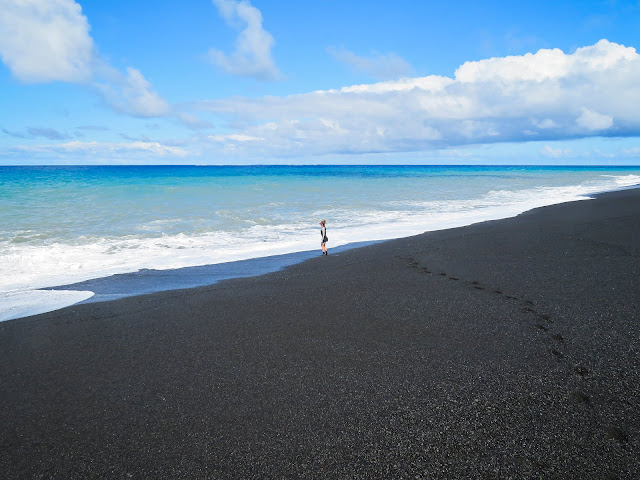 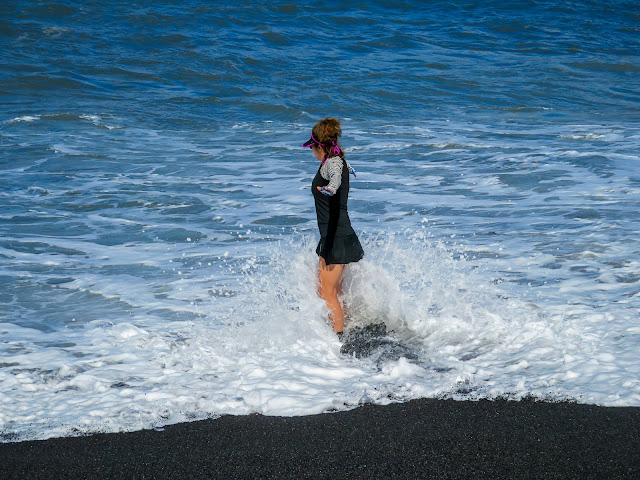 Continuing on to the back of the volcano we found a lot of bird eggs laying on the ground.  Rich got some drone footage on top of Hunga Tonga that showed Brown Boobies nesting with their babies.  I poked at one of the eggs to see if it was empty or not.  It was stuck in the sand so I kept pushing harder until my finger poked through the shell.  It was filled with the stinkiest goo I have ever smelt.  Disgusting!
The backside of the volcano has some huge cliff like walls too. The material of it is like concrete with aggregate in it. There is a close up photo below. It was pretty tough.

On our second day we decided to go explore the South island: Hunga Ha'apai.  We took the dinghy all around it looking for the best place to swim to shore.  Nothing looked good.  The waves breaking on the beach were pretty large and wicked.  Like on the other island, the shore didn't gradually come down into the sea.  There was an abrupt wall of pebbles where the waves were crashing.  The shore break on this island was a lot rougher than the other and we probably should have skipped it.

On our swim in to shore Rich got rolled in a breaking wave and lost his mask and snorkel.  And on the swim back out, the exact same thing happened to me.  I was standing a good 15 ft up on the shore watching the wave pattern trying to time my entry.  A really large one came right up and pulled me down the steep slope.  I was rolled by the next one and lost my mask and snorkel.  I started kicking like crazy to get away from that shore!  We finally both got back to the dinghy and hauled the anchor and  guess what?  The motor wouldn't start.  Rich had to hurry and get the oars out to row us away from the shore break.  This was as difficult as swimming in those breakers.  The current and wind were against us so rowing was extremely slow.  We were about a mile from Pogeyan.  This day was more excitement than we wanted!


We both tried several paths to get to the top but were unsuccessful.  I don't think the birds would have wanted us getting up near their babies anyway.  They were circling above us seeming to tell us to leave.

But, on the bright side we did have an awesome hike.  We wanted to hike to the top of Hunga HA'apai because that is were the brown boobies had their nests with babies.  Rich took drone video and it looked like it was possible to get up the steep sides to the top.  Nope!  It wasn't happening.  Every path got to a point where it was too steep and high to climb.

We walked around to the edge of the island where enormous waves were breaking.  They were so high we could see them 20-30 ft high over the top of the island.  We wanted to get closer.  As we got over to the end of the island we saw there was a cave that we could go in.  Rich explored it and found a route all the way through to two spots on the rock face where we could look down at the huge waves slamming on the rocks.  Below is a short video clip showing both lookouts and what we saw! 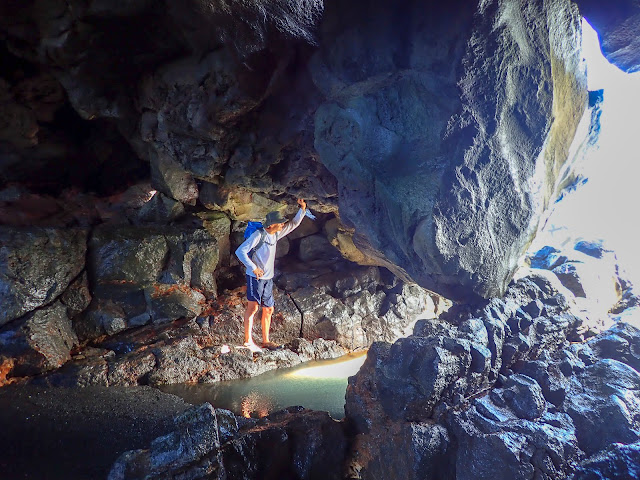 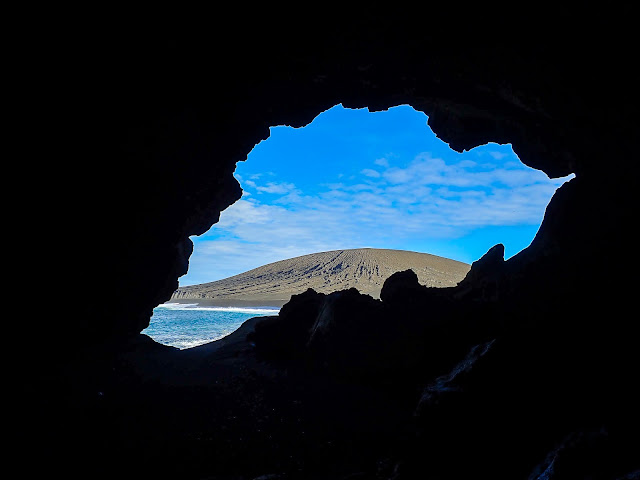 To view all the photos from this blog Here.