Our new favorite place in the Ha 'apai group! There are so many gems here it is hard to say which is the best but this place ranks at the top for us.  But, this is where I swam with the whales twice so for me this is the best!  Click Here for that post.  The reef around the island is huge and there are shoots off it creating an arc. We anchor in the arc so we aren't really close to the island. But, it is a lot like being at Minerva Reefs. The breaking ocean waves are all around us and there is little protection from high winds and big seas. So if the winds pick up we have to go find a more protected island to anchor at.


Below is a satellite view that shows just how vast the extending reef system is.  We never tried to get to the island when anchored at the north.   We hope to get back there so we can explore it further.  Our preferred anchor location is where you see the pink dot that says "Pogeyan was here 2019".  I drop these markers in our navigation program and I can add notes about the place which is helpful.  After a while you forget what each island has to offer so notes to jog your memory is good!  The green and blue lines are our tracks as we come and go.  It is helpful to keep these in case we need to navigate in the dark or when visibility is bad.  We know we can follow the past tracks without running into coral or too shallow of water.

Where our boat sits you see there is another reef system that extends up like a thumb.  The white curve you see is breaking waves on the reef.  This area is great for exploring.  There are large finger grooves from inside the reef that take you out into the open ocean (the navy blue water).  Large game fish (which means good eating fish) hangout in these passes as well as a lot of  smaller fish and even sharks!  When you have a pass out to the open ocean the tide flowing in/out brings current with nutrients and food for the fish so they are great places to snorkel/dive.  And this section of reef has several of these cuts for us to explore.  It is also a good place to spear fish because the yummy fish can be found here. 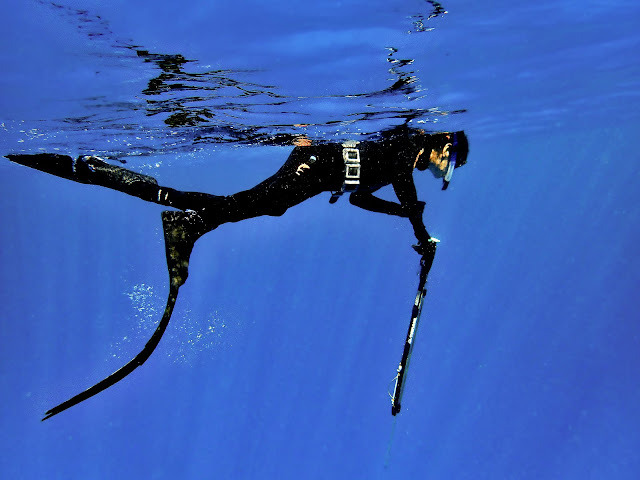 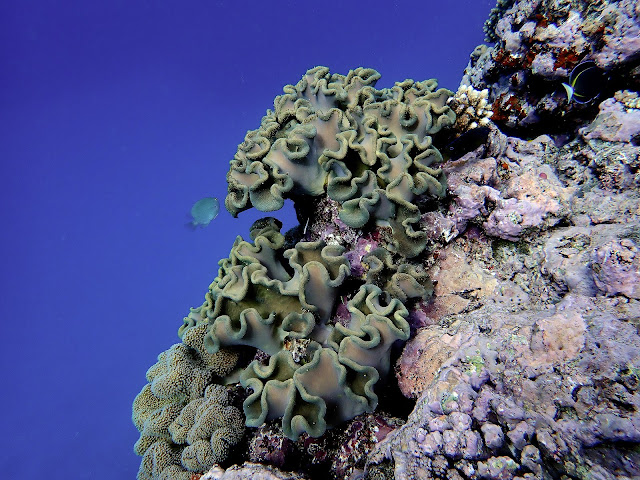 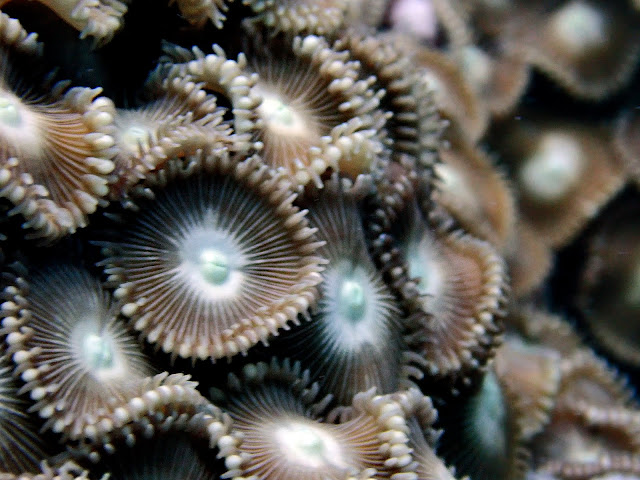 Another fun past time is sitting on deck and watching the waves crash on the reef.  There are 2 places that they get pretty big and it's so relaxing to just sit and watch. 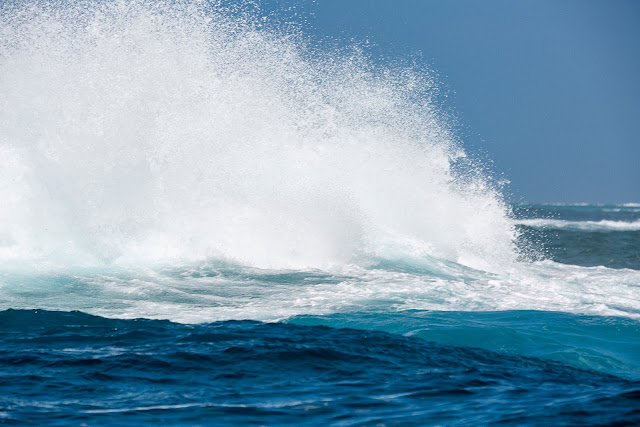 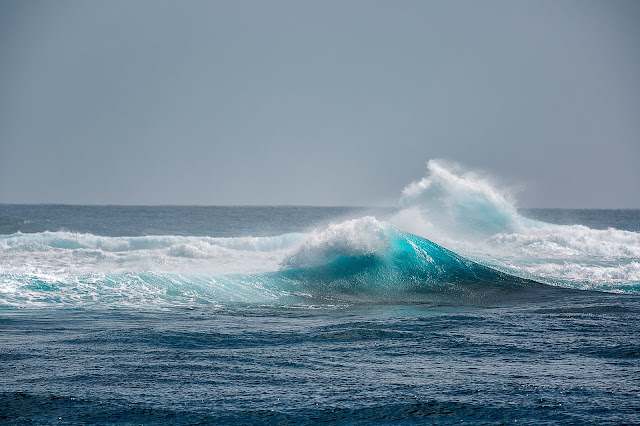 The volcano Kao can be seen really well from O'folanga.  There are a lot of nice sunsets with the volcano in the background.  We tried all season to sail there but the weather never worked out to make it there and back sailing.  We could usually sail out there but would have to motor back into the wind.  So we never did go, just admired it from afar. 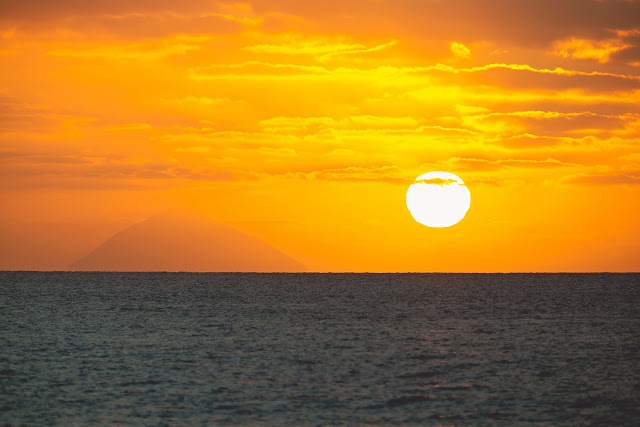 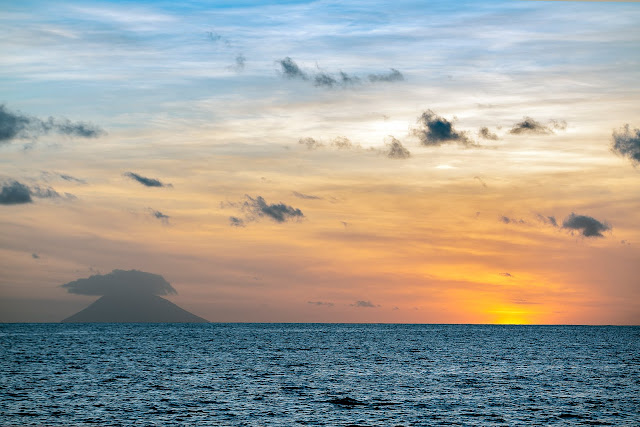 In the reef system there is a small (approx 50 ft wide) blue hole that goes down to 120 ft. At this point there is a cave you can swim through and get out of the hole. Rich was obsessed with diving this cave. So the day I hurt my wrist we got our scuba gear on and went down to 120 ft to go into the cave, We forgot to bring a dive light so it was dark and spooky. I didn't want to go in and Rich even thought is was creepy. So we stayed outside the cave and dove the reef which was amazing. Upon returning to this anchorage Rich wanted to try again to do the dive. So we went back with snorkel gear to check it out. Guess what was in there about 50 ft down? Grey reef sharks, first one, then two then three! And they were acting twitchy which is a bad sign. These sharks can be aggressive so we swam away. I got some good shots of the sharks circling and then of Rich peering over the coral looking to see if they were gone. Seeing them inside makes me never want to dive that cave. 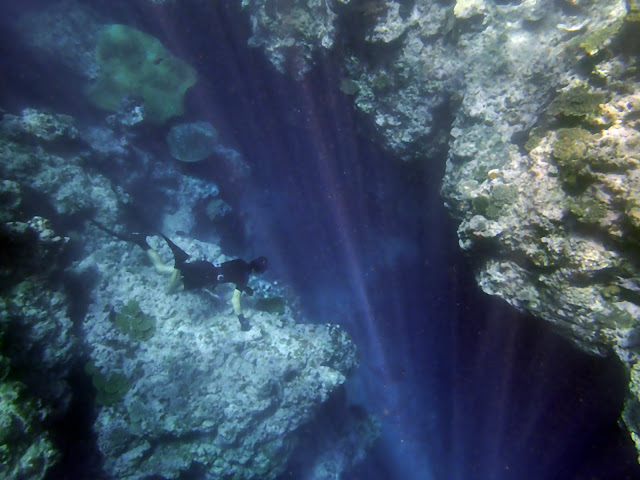 Rich is about 20 feet down peering over the edge looking for the sharks.

A pod of dolphins came by 2 or 3 times. The last time I jumped in the water and swam over hoping to get underwater photos and interact with them. Rich stood on the bow of the boat pointing which way I should swim. At one point there were some on both sides of me so I was hopeful. But, they ended up swimming off and I never did get an underwater look. I got some photos from the boat but they didn't jump very far out of the water. I'd say there was 20-25 of them. And when they blow it seems so tiny compared to the sonorous whale blows we are used to hearing. 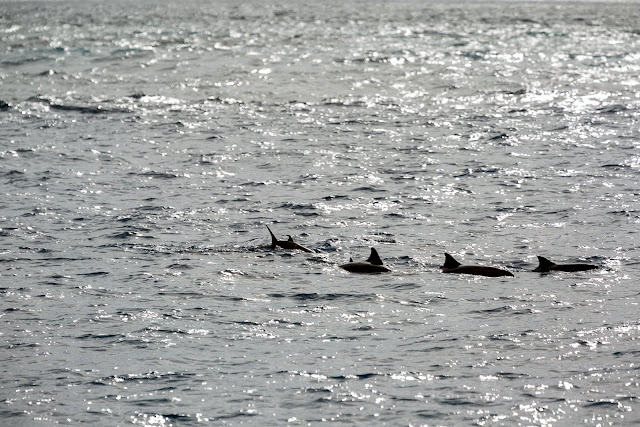 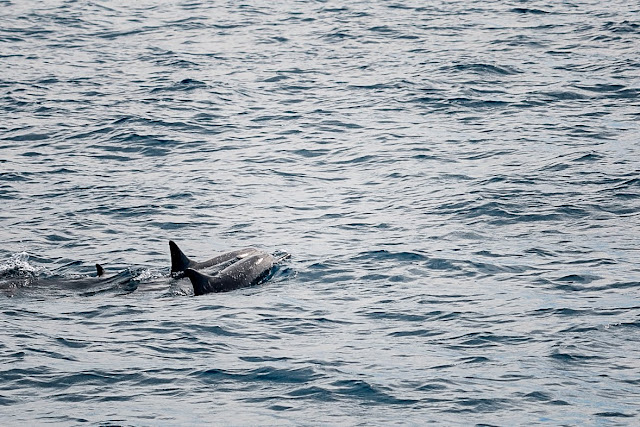 Everytime we went to O'folanga there was a squadron of squid that would come up to our boat.  Sometimes 2-3 times per day.   I got photos from out of the water and some by sticking the camera down in the water on a selfie pole.  They never came at a time where I could jump in to swim with them.  They would change color to white as they got closer to our white hull!  Then turn back to brown as they got further away.  We could see them shimmering and changing colors even from out of the water! 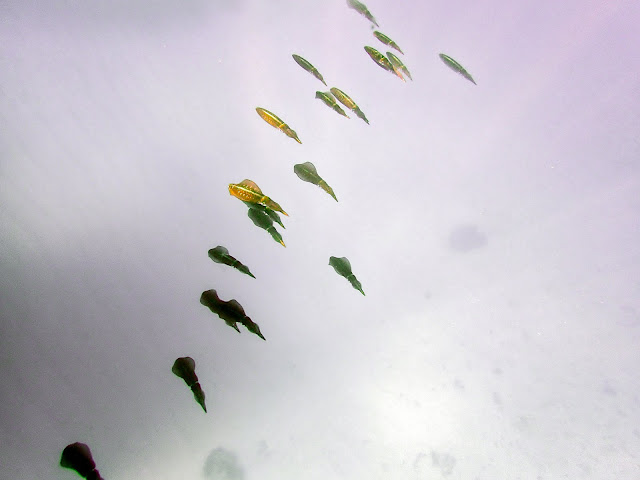 Though there is an island here, we rarely get to go ashore.  You have to anchor to the south of the island to be able to take the dinghy in to shore.  We anchored there once when the weather forced us to.  In the satellite view above it is the green dot south of the island.  We preferred to anchor on the west side so that all the reefs were close and easy to get to for snorkeling and diving.  Anyway, we went ashore once and it was a great beach.  We saw so many huge hermit crabs.  The biggest ones anywhere.  They were hanging out in groups as they usually do, since they are social animals.  Not only were they on the beach they were also up in the trees! 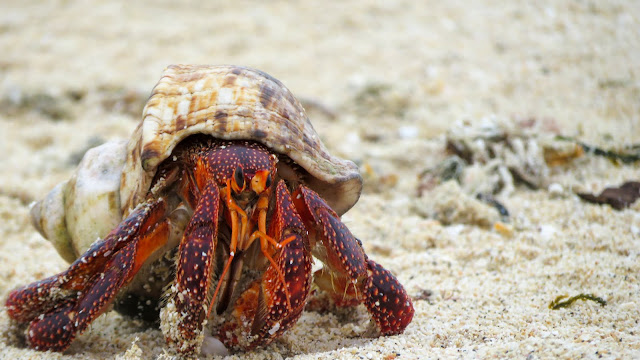 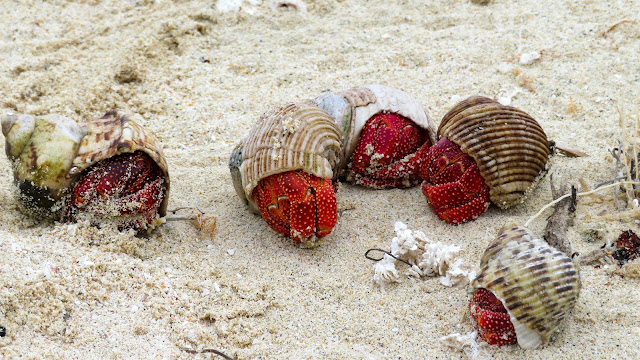 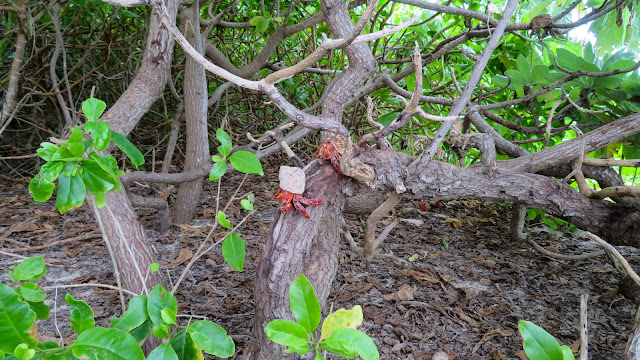 After only 1 day here, we had an unexpected change in plans.  I slipped when getting into the dinghy and hurt my wrist.  I was worried I might have a fracture.  After some research we determined the nearest x-ray facility is in Tongatapu which was 100 miles South of our location.  After a quick overnight sail down to the capital city we took a taxi to the hospital.

Thank goodness my wrist isn't broken, just soft tissue damage.  We were so relieved.  I would have had to stay out of the water for 8-10 weeks if a cast was required.

The hospital visit was another pleasant medical experience in a 3rd world country.  The entire process took about 2 hours but was unbelievably simple.  I went in and they asked for 4 basic pieces of info; name, phone number, what happened and when. I was directed to wait on some bleacher type benches until the doctor called me.  About 10-15 mins later I went in and he asked what happened etc and ordered an x-ray then said to come back afterwards so he could read them.  The pleasant, chatty doctor spent 20-30 mins just talking to us about books he has read on American history! In the US I'm hardly able to ask a question to my doctor if it doesn't directly relate to the reason for my visit.

Next, I went to radiology and they asked where I lived.  Upon learning I'm a visitor the check-in secretary apologetically said they would have to charge me for the x-ray.  "No problem" I said, "How much is it?"  She made a call and told me it would cost 50 TOP plus 20 TOP for the doctor's consultation. 70 TOP is $30!

On the bright side, our trip back to Tongatapu was an opportunity to get our laundry done (huge treat), eat some ice cream, get my hair done, donate blood and stock up fresh fruits and veggies.  (Ha 'Apai group doesn't have a very good supply of fruits and veggies).  And Rich caught two yellowfin tuna on our sail back. Yummy!


We sailed back to O'folanga yesterday and are sitting out on a rainy day. Hoping tomorrow will be sunny so we can continue exploring Ofolanga!