Pangai is the largest town in Tonga's sparsely populated Ha'apai group but it's really just a large village.  The entire Kingdom of Tonga has a little over 100,000 people and it doesn't look like
more than a 1000 of them live here in Pangai.  Most of the town was wiped away by a cyclone back in 2014 and the rebuilt town is about 6 by 3 blocks with quite a few empty lots.  Pangai is the only spot within a 100 miles where we can stock up on groceries, fruits, veggies, bread, and, importantly, grab an ice cream cone!  "Downtown" Pangai is neat and clean and there is obvious pride of ownership.

Way back in 1773 Captain James Cook labeled Tonga as the "Friendly Islands" when the natives showed him their best side.  In fact, they were actually planning an attack that was foiled when his fleet departed sooner than expected.  In our opinion, the Fijians are much, much more warm and engaging.  Tongans, especially older Tongans, tend to be more reserved around foreigners.  Not hostile by any means.  Just shy and indifferent.  In the capital city we've walked into shops where the staff doesn't acknowledge our presence until we stand right in front of them and say "hello".  The majority of our interactions and transactions are cordial and light but sometimes the tension is palpable.  For example: Rich bought some fishing supplies at a small shop last week and the entire transaction was difficult and stressful.  For reasons I can't understand, the shop owner hovered around him and her counter clerk, staring intently at them both.  We were happy to get out of there.

But here in Pangai everyone seems to go out of their way to say hello and strike up a conversation.  We have really come to like this place.  Yesterday we were walking into town to get a propane cylinder re-filled when 3 school girls called to us from across the street.  They all waved hello and asked what we were doing.  We stopped to talk with them for a bit and I asked if I could get a photo.  They are the cutest little girls and very polite.  I think the Tongans are very lovely people.  Most of the men are big and buff and look like warriors.  The women have a natural beauty.

On all of the islands the school kids wear single-color uniforms.  Every church has a school and an associated color.  We were told the kids can go to any school regardless of whether they belong to that church.
After our chat with the 3 ladies we continued on to the Tonga Power Company office which is also the local gas distributor.  We arrived right at the end of their lunch period and had to wait outside for a bit with another patron who had a dog. He and Rich struck up a conversation about New Zealand and Tonga.  I tried to make friends with his dog.  The dog was typically wary and very skinny.  His ribs were showing.  His owner could pet him but he was very afraid of me.  I asked why the dog was so skinny, stating that he needs food. I can't help but campaign for these poor dogs.  He told me his wife is from New Zealand and he just returned from a month long trip there.  His dog stayed here with his family and he didn't think they fed him.  :(  I couldn't imagine doing that to any animal.  I told him to go home and fix the dog a steak!  He explained to me, with a kind smile, that Tongan's don't really like dogs and in fact they view them as food!   He patiently explained that it's the Tongan way.  Aarrrggghhh....  That is ghastly to me.  I told him dogs are man's best friend and we need to take care of them.  He said, "I know, it is my daughters dog."  I took this to mean that his daughter is the only one who sees the dog as a pet.  I find it very hard to see the neglected dogs running around every town and village here in Tonga.  This guy was very friendly and at least the dog had a collar - which you rarely see here.  Hopefully, he went home and gave the dog some food and love.

When the power company workers returned from lunch they told us their gas tank was empty and they were waiting on a truck to refill it.  So Rich carried our gas tank back again the next day to get it filled.

Next we headed off to get some ice cream!  Below are some photos I took as we walked along the street.

When we arrived at the ice cream shop we happened upon a prison truck with several kids sitting in a crew cab.  Two boys jumped out of the cab and ran over to join us at the ice cream shop, leaving a little girl behind who gazed out the truck window looking quite forlorn. Rich asked the boys: "Why is that girl going to prison?  Did she not do her schoolwork?"  We all had a good laugh.  The boys said "that is Mageda!" - as though that explained everything.

We stood in the tropical heat eating our ice cream cones and barely keeping ahead of them melting into a puddle at our feet.  We then headed over to the only restaurant in town: Mariner's Cafe.  Mariner's is a well known hangout for yachties since they serve Western style food such as hamburgers and pizza.  Rich had read about it many times on other cruising blogs so he was excited to finally arrive here last year.  The owner has a guest book logging all the visiting boats that goes back many years.  It was fun to see many boats we know. 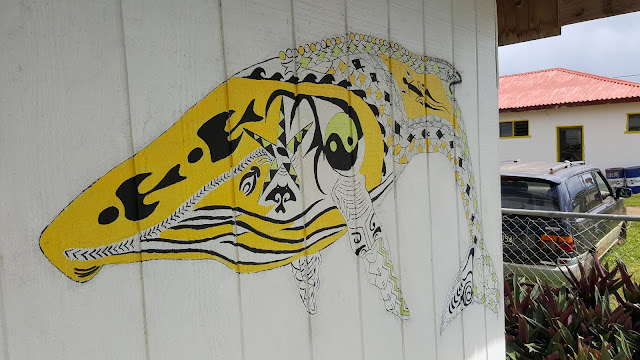 It made my day when a dog stopped in and I was able to pet and feed her!  The owner said the dog comes often and knows she can get scraps.  I could tell because she didn't have her ribs showing.  It's very unusual for any dog here to allow you to touch them.  They aren't treated well and are afraid of people.  It makes me sad.  Notice in the photo below her tail is tucked between her legs.  That is a sign of "I'm frightened or please don't hurt me."  In the US I volunteered at several dog rescues and when some of the dogs first came to the rescue they exhibited this behavior.  It took time and love to teach them they were safe and ok.  But, here in Tonga there are no dog rescues and most are left to fend for themselves on the streets.

So, that was our day in Pangai.   It ended on a happy note since I got to pet a dog!