We have arrived in Tonga!

We cleared into Tonga yesterday which marks the end of our first major passage with just the two of us. We left New Zealand on June 23rd and sailed for 6 days to North Minerva Reef. We stayed at Minerva Reef for 3 weeks and then sailed 2 more days to get to the island of Tongatapu which is the capital of Tonga. 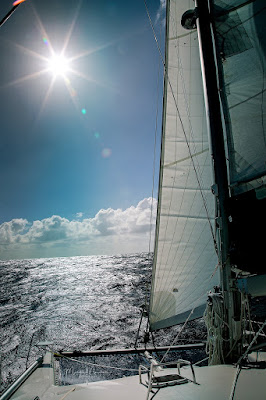 One of our rudders de-laminated on the passage from New Zealand and had to be repaired at Minerva. We were lucky to be there the same time as two other sailors who arrived in boats they built themselves. One of them, Ed from Aka, has been cruising the Pacific and building boats his whole adult life. He was a US Army brat who grew up in Hawaii but he and his wife Fran now call New Zealand home. He came over and worked with Rich for 3 days building up and strengthening the rudder.
The stopover was quite welcome. Moving around the pitching, rolling boat on passage I'm always getting bruises. And it's very tiring keeping a round-the-clock watch schedule. I was happy for the break after 6 days at sea.
North and South Minerva Reef are a popular stopover for yachts traveling between New Zealand and the islands. They are almost on a direct line between Tonga and New Zealand.
The north reef is circular (3.5 miles in diameter) with an opening wide and deep enough for any boat to pass inside. Every day at low tide the reef is exposed and you can walk on it. All day long you hear the ocean roar as the waves break over the reef. It’s a pretty cool sound.

On the second week we started spotting an adult whale and what appeared to be 2 juvenile whales. We called them small one, medium one, and ....wait for it...large one. Hey, we're engineers, not artists. They came right up to the boat several times and would blow - causing us to run outside. Most days they would roll around, slap their tail fins, or breach somewhere in the center of the reef where it's about 60 ft deep. Sometimes it looked like they were waving their fins at you. It was so cool. One day we jumped in the dingy to get closer photos. We stopped a couple hundred feet from them and turned off the outboard motor. They circled around us a few times and exposed enough of their bodies to blow over and over - but mostly stayed under water. At one point the small one and large one swam right under the dinghy. I did get a few close-ups. One of the primary attractions in Tonga is the possibility of swimming with them. 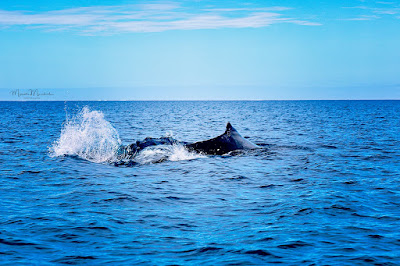 We are in Tonga now anchored near Big Mama's Yacht Club. We saw her last night and she's more of a medium-mama. Unfortunately, her establishment was heavily damage by a cyclone in February. We are right next to our friends on Mango Moon who we first met in Whangarei.
Below are some of my favorite photos from our sail here, our stop in Minerva, and some underwater photos at Minerva. The most memorable things about Minerva Reef are the vivid teal blue water colors, the constant ocean roar, the gorgeous giant clams, the whales and some rather territorial sharks. Overall, a very cool place to visit.
by Michelle & Richard Marshall

To see all our Tonga photos click this link https://michellemarshall.smugmug.com/Tonga-2018