The kingdom of Tonga has 4 main island groups.  We are in the southern-most group: Tongatapu.  Specifically, we are at Nuku’alofa the capital of Tonga.  Tonga has approx. 174 islands and this group has 30-46 islands.  The royal palace is located here as well.  Most of the population is Polynesian.

They are definitely on island time here.  No one is in a hurry to do anything.  I’m not either but I blame it on the heat.  It’s too hot for me!   Rachel has been our taxi driver.  She is a sweetheart.  She goes along with us in open air markets and shops to help us find things and get good deals.  It’s invaluable to be with a local when you are first getting to know the lay of the land.  It was a huge help having her as an interpreter when dealing with merchants, government employees and doctors.


The island was hit by a cyclone in February and it's trail of destruction is obvious.  A lot of structures just have framing left, trees are blown down etc.  Big Momma’s is a popular restaurant/bar for cruisers located a mile across the bay on the small island of Pangaimotu.   We anchored near it along with 3 or 4 other boats.  Big Mommas's was pretty much destroyed.  You can see in the photos they are slowly rebuilding it.  There are 3 dogs and 2 cats on the island and a few people who live in modest bungalows.  I think those dogs and cats are the healthiest of all in Tongatapu.

One of the sweet young dogs had an injured paw and was limping.  We ate dinner with a cardiologist and asked him to look at the paw - but the dog would have no part of it.  I was wondering if it would benefit from one of the antibiotics in our medical kit.  We left Tongatapu island group to go explore the more remote Ha'apai group.  Unfortunately, when we returned to Tongatapu a couple of months later to check out of Tonga we were told the dog had passed away.  They didn’t provide any details and I was too upset to go ask.  I assumed it had something to do with the wounded paw.  It probably got infected.

The town has a local market with fresh fruits and vegetables.  There are artisans selling handmade crafts too. 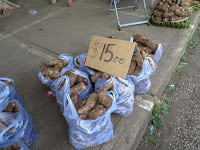 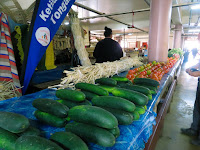 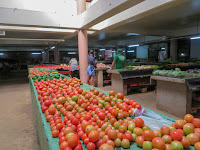 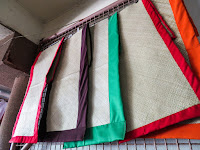 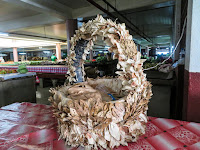 A mega yacht over 100 ft long was anchored near us.  The yacht had a crew of 10 people.  The day before we arrived Mango got a tour of the yacht.  They said it was pretty spectacular.


There was a nice reef not too far from out boat.  Lisa and I snorkeled there a couple times.  The highlights were a clown triggerfish (aka big spotted triggerfish), puffy starfish, lots of pin cushion sea stars and bright pink soft corals.  Pin cushion sea stars are fun to search for as they could be laying on the bottom or they may be wedged in a crevice or hanging vertically on a coral.  They come in various colors, yellows, reds, purples, and maroons are the ones I have seen.  They are pretty substantial in size as you can see in the photo below compared to Lisa's hand the sea star is huge.  The spotted triggerfish can bite people so you have to careful not to get too close!

Visit this site to see all our Pangaimotu photos: Tonga-2018 Pangaimotu