We had a few errands to run in town yesterday that had us walking all around the city of Nukalofa. My iron levels run too high and I needed to get blood drawn and sent to a lab.  Visiting a hospital earlier this week we were told to visit a local physician who accepts walk-ins in a clinic.


The entire experience was so easy and inexpensive compared to the US. The clinic is an exam room in a pharmacy. We walked into the room and the Dr. was sitting behind a big wooden desk facing us. To his left
was an exam table and behind him the wall had 3 shelves with supplies. I told him what I needed and why. He wrote it down on a sheet and we discussed my condition briefly. Then he called the hospital and told them my blood would be coming over to be sent with the next batch for the lab in New Zealand. He spun around grabbed what he needed to take blood then took the sample and labeled it. No muss no fuss. He’ll email us the results and gave us his email. When we were done he wrote down the services he provided on a post-it for us to take to the pharmacy counter. The office visit and lab test cost $100 TOP (about $45 USD). We were in and out in less than a half hour. It was the most efficient medical care I have ever received! I didn't have to fill out 4 pages of irrelevant medical history (the same ones I fill out every time I visit any US Doctor over and over again) I didn't have to be referred to him or see my GP first. No tag-team of nurses before-hand. Very efficient!

It was Friday and around 4 pm when we finished at the clinic. There was actually a traffic jam in downtown Nuku'alofa. Lots of school kids were wandering around in their uniforms.

We next walked 2 miles to the West to check out a highly rated Italian restaurant called Little Italy. They had, without a doubt, the best pizza and salad we've had in the Southern Hemisphere!  We walked along an oceanfront boardwalk when we left.  The sun was setting and we had sensational views of the ocean.  As we walked of course we ran into a stray dog.  I had half of our salad with tuna left that we fed it.  I always helping at least one dog while we are on an island.  The more the better. 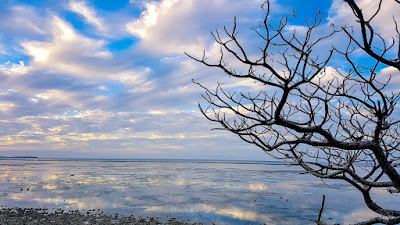 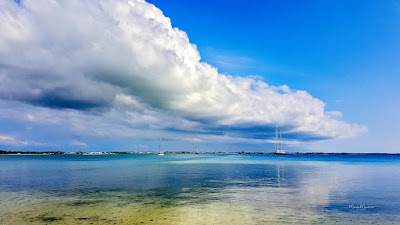 Many Tongans wear a traditional type of dress to work - especially government employees. It involves a woven mat that wraps around the waste called a taʻovala. It's worn by men and women at all formal occasions. For men it's equivalent to wearing a necktie. For women it is somewhat less common, as they prefer a kiekie. The kiekie is somewhere between a mat and a grass skirt (manafau): it is a string skirt attached to a waistband. It is supposed to be somewhat transparent, showing the skirt or tupenu worn under it.
When we checked into the country we had to go to the immigration building.  The Chinese donated money to build it and it opened about 9 months ago.  Rich and I joked that we worked there because everyday we were sitting in the office.  You go there and tell them what you want to do.  They took our passports and said come back tomorrow after a certain time.  We went back and I think the person we needed leaves at 2 pm so we missed them and had to return the next day.  A typical scenario in Tonga for us.