On our charts the little island of Tokulu looked appealing. It’s not adjacent to an inhabited island - which means there might be less fishing pressure. Our cruising guide didn’t mention the island and we could find no mention it on the Internet. We’d probably have the place to ourselves. But that hasn’t been a problem here in the Ha’apai group. We’ve only seen one other yacht in the last 3 weeks.

To determine if Tokulu would make a safe overnight anchorage we first looked at satellite images of the island to find if there were any locations we could anchor on the leeward side. The winds were predicted to come from the West and Southwest for the next two days.

Looking at Google Earth, we could see a sand patch on the Northeast corner of the island. The images also showed several isolated patches of coral in the sand. But it looked good.

It’s fun to explore these seldom-visited islands and look for shells and other treasures on the beach. But it can be difficult to take our dinghy all the way to shore when a fringing reef encircles the island. Tokulu has such a reef but we could see a possible channel on the satellite image.

We love diving and we seek out locations for wall dives. At locations where the depth drops off abruptly the water tends to be clearer and larger sea life tends to hang out “over the abyss”. The satellite images of Tokulu showed an abrupt color change in the water on the West side. Sure enough, as we approached the island our depth indication promptly changed from 300+ to 40 feet. The winds and waves would be coming from that side for the next two days – so we wouldn’t have surf-generated sediment on that side.
We timed our arrival at Tokulu so the sun would be high overhead. We approached the sand patch on the Northeast corner and circled around looking at the bottom in 30-40 feet of clear water. Google Earth images are an incredibly valuable tool for cruisers. They are geo-referenced images which are often detailed enough to show individual coral heads. At Tokulu we were lucky to have a good cellular data connection and we could simultaneously see our position on the Google Earth map along with every patch of coral. And we could verify the location of everything with our eyes. We dropped the anchor in 25 feet over sand and motored in reverse to make certain it was holding. After we were settled in, I dove to the anchor and found it was buried - but the sand was really lightweight ground-up coral - and only about two feet deep. Since the weather was forecast to be mild for our stay we would be OK. Our anchor chain ran close to a 20 foot circular coral head that stuck up about 5 feet from the bottom. Overnight the winds shifted and put our anchor chain right up against the side of the coral patch. In the morning I pulled up half the anchor chain and attached several old fishing buoys to the chain. When I put out the chain again it was lifted over the coral patch. Dragging chain across coral causes damage that can take decades to heal.  And we never want our chain to get caught on anything.  Having the chain caught on reef creates a tremendous shock load if the wind picks up.
We spent the afternoon snorkeling all around the little lagoon right next to our boat. Whenever we were more than a few feet deep we could clearly hear whale song. It's a beautiful and eerie sound that sends chills up your spine. 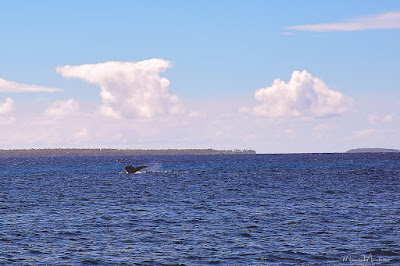 I took the dinghy into the channel we located on the satellite image. I wanted to see if we could get all the way through the reef the next day. The tide was going out from the channel and the channel appeared to be the only drainage path because water was really flowing out that little channel. The current must have been about 3-4 knots against me and I had to gun the engine to maneuver around the corners. Finding a clear route all the way to the island I turned around and idled around the corners as I was “flushed” out the channel back to the lagoon.
The next morning the sky was overcast as we took the dinghy in to the little island. The whole thing can’t be over two acres in size. The only sign of humans is a non-functional navigational beacon on a 30 foot aluminum tower. And some trash washed up on the beach. One thing we noticed right away on the remote islands of the South Pacific is the small amount of trash washed up on the beaches. Make no mistake, it’s here. But the quantity is a tiny tiny fraction of what we observe in the Caribbean.

Walking around an uninhabited island I get a kick out of the piles of old coconuts underneath the palm trees. Walking all the way around you come back to your own footprints. Stepping into the wooded areas a short distance the wind shuts off like a door was closed. I’m always amazed at how effectively the plant life on these islands blocks the wind.
In the afternoon we decided to go dive the drop-off on the windward side of the island. We wiggled into wetsuits and loaded our scuba gear in the dinghy for the ride around to the West side of the island. It was a bumpy ride up and down the large swell since we were out from behind the protection of the island and the fringing reef. We found the drop-off and checked conditions for a dive. The first step was to make certain we could secure the dinghy. The dinghy would quickly wash onto the fringing reef if the anchor dragged. We put out all 75 feet of our anchor rode in deep water and let the dinghy drift over the edge of the drop-off. The anchor caught solidly on the wall. Next I checked for excessive current by dropping in and hanging off a tagline. The current was very low and the dinghy was riding nicely at anchor.
Michelle grabbed her camera and dropped in. It was awesome below. Visibility was at least 150 feet. The drop-off started at about 40 feet and went down quite a ways - we couldn’t see a bottom. I swam down to the anchor which was caught in the wall and relocated it to a sand patch. As we were diving the sky got overcast so photos are a bit gloomy. Michelle was using hand signals that made me think she had trouble equalizing her ears. Then I thought she was asking if I had trouble equalizing my ears. Then it seemed she was indicating that her air was cutting off. She finally gave up and gave the “everything is OK” sign. When we were hanging at the anchor line during our safety stop I finally understood what she wanted. She wanted us both to stop blowing bubbles for a short time to listen for the whales. When we got quiet we could hear whale song but it wasn’t nearly as loud as on the other side of the island. 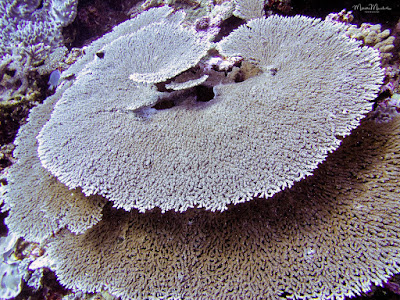 Returning to the boat we saw quite a bit of whale action between us and nearby Wickham Reef. They were breaching, rolling and blowing all afternoon.
Later that night we were settled into our nighttime routine: Michelle was processing images while I read a Kindle book. At about the same moment we both realized we were hearing whale song through the boat hull. It was faint and we didn’t realize what it was at first. When there was a particularly distinct sound we looked at each other with a “did you hear that too?” expression.
Rich

To view all our photos visit https://michellemarshall.smugmug.com/Tonga-2018