Uonukuhihifo. One of Our Favorite Anchorages in the Ha'apai Group

We sailed away from Toluku and headed to Uonukuhihifo.  That name is difficult to remember so I call it "hi hi fo fum"!  Winds were light so we motor-sailed to gain speed.  We saw at least 20 whales along the way.

The conditions were very calm.  It reminded me of sailing in the BVIs where the ocean was so calm I could sit on the bow seat and cabin roof while under sail.  That is a rare thing here in the South Pacific.  Open ocean sailing in general is a whole 'nuther thing.  It is thrilling, exhilarating and just plain scary at times.


Our jaws dropped as we pulled into our new anchorage.  There are 2 long islands connected by an exposed sand bar.  The water is beautiful turquoise and we were all alone!  We love the solitary anchorages.  Not long after arrival I saw a huge whale display on the windward side of the island.  The blows were like a non-stop fireworks display!  One after another over and over.  Big splashes as they leapt out of the water, breaching over and over.  This place just went up on the awesome scale.


Then it got better.  About 4 pm I noticed a mother and calf messing around across from our boat in the shallow waters near a breaking reef.  The mom's back was continually out of the water which I have never seen.  They typically blow and slowly roll back into the water.  It looked as though she was laying on the bottom with water barely covering her.  I wondered if she was stuck but she was moving from time to time.  After about 20 minutes Rich asked if I wanted to go over and see if we could get closer.  Oh yeah!  We weren’t geared up to go in the water but hoped for better photos.  We approached slowly in the dingy.  Rich killed the motor and we drifted so as not to disturb them.  Then they were approaching us!  At one point they were 20 feet away!!!  It turned out they had an escort male with them.  When there were about 20-30 ft away a big whale came towards us between the mom and calf.  He went under our boat and came up on the other side.  It was so cute to see the mom protect her baby.  She kept it on the outside of her away from us.  All 3 whales were very calm and gentle.  They moved slow and appeared to be checking us out too.  Rich saw the mom roll on her side so her eye came out of the water.  They never made any fast moves or big splashes.  Several times they all dove under our dinghy and came up on the other side of us.  But they stayed with us for a good 15-20 minutes.  We only saw their dorsal fins and blow holes.  You can make out the moms body and tail under water in one of the photos.  It was moving to be that close and hear them.  They made a sonorous grunt or groan a couple of times.  I heard it as we first approached and I wondered if it was a warning.  It was deep and intimidating.  I heard the calf make a similar noise a one point.  What a magical experience that was, and I will never forget it.

The two volcanic islands Koa and Tofua can be easily seen from our anchorage.  Every morning and evening there was the most colorful light display with them in the background. 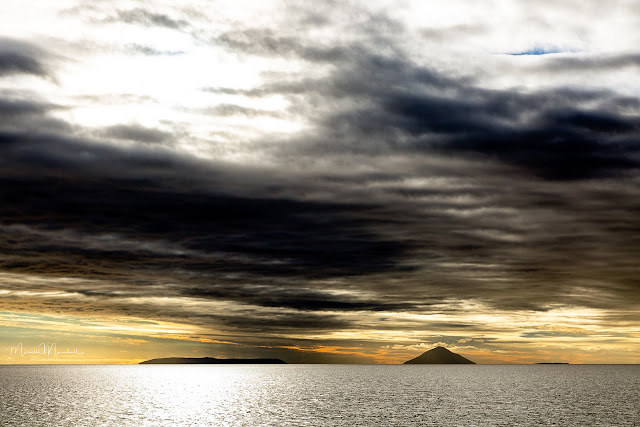