For the last few weeks we’ve been criss-crossing Tonga’s Vavau group checking out known dive spots and exploring some on our own. Overall, we’ve been disappointed in the condition of the reefs. We were spoiled by the reefs in the Hapaai group. We are making preparations to head back there with our friends on Mango Moon.
Seeking healthier reefs here we decided to check out a seamount we could see on satellite images. It was in deeper water a few miles East of our anchorage. We loaded up the dinghy with our scuba gear and took off to find it. We were heading upwind through some chop that made the ride bumpy and unpleasant. 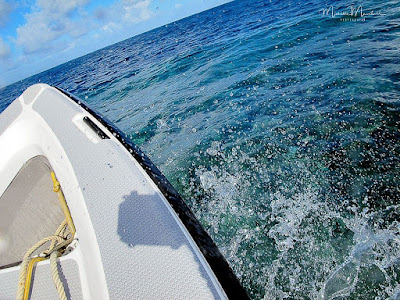 A navigation app on my cell phone got us near the location. Finally we could see the top of the seamount up ahead. It was an odd, isolated bit of breaking surf far away from everything else. It was roughly circular and about 100 yards in diameter. The reef top looked promising so we found a safe spot to wedge our anchor. But after dropping in with snorkel gear I could tell it was another dead reef with tiny fish. We decided to leave the dive gear in the dinghy and just snorkel all the way around. A subpar snorkel in paradise is still a snorkel in paradise. Right?
As we made our way around we did see a few interesting things. A large Eagle ray was moving along below us in the gloom at one point. We saw a large barracuda and an unusual (to us) bright yellow puffer fish. The topography of the seamount was also interesting. The sides were steep and about 75 feet high. At one corner it looked like a giant section broke off and was lying adjacent with remnants of dead elk horn coral piled on top. It was obvious the coral had been alive not long ago. 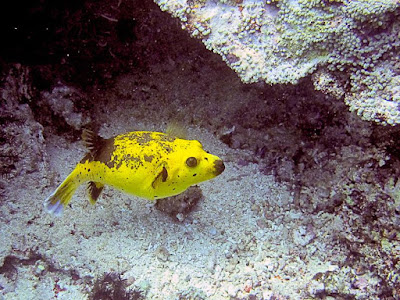 This guy was visible from far away


When we got back on the dinghy some motion to the Northeast kept catching our eye. A few miles in that direction was the Eastern edge of the Vavau group where the outermost barrier islands meet the open ocean. The waters we’ve been exploring this past month are mostly calm since they are protected by those barrier islands. We could see occasional plumes of white spray shooting up quite a distance above wooded islands in that direction. Like daytime fireworks. We HAD to check that out. 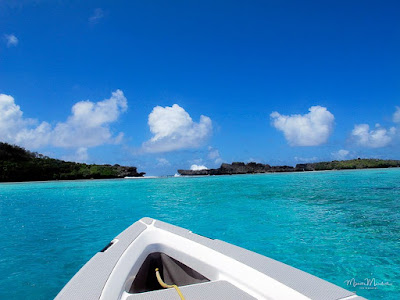 It took us the better part of an hour to find a way through the reefs to get to the barrier islands. They turned out to have cliffs on the ocean-facing side with some pretty impressive breakers smashing onto them. We could hear a blowhole whoosh-ing away on the nearest hilltop. We found a spot to place the dinghy and worked our way across a large shallow area to the side of the hill. The hillside was a rugged 45 degree slope up to the cliff top. It was an easy climb but involved picking our way over about 200 feet of jagged material that we could feel through our soft dive boots. Water from the breakers flowed continually down little streams on the hillside. We found easier going up along the largest stream – which lead us right to the blowhole we could hear from below. It was about 2/3 of the way up.

The blowhole was rectangular chasm about 1 by 4 feet wide. When it blew, the water blasted back away from us - towards the ocean. But wind carried the spray right back onto us. I had scouted the top by myself and showed Michelle where to position near the blowhole with the underwater camera. The first time it blew it took her by surprise.

We climbed to the top to look out over the ocean side. The color of the deep water was a gorgeous contrast with the white spray and foam. The power and beauty of this ocean isn't captured by the camera. I don’t think I’ll ever stop being in awe. 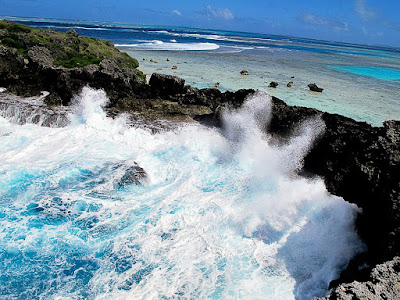 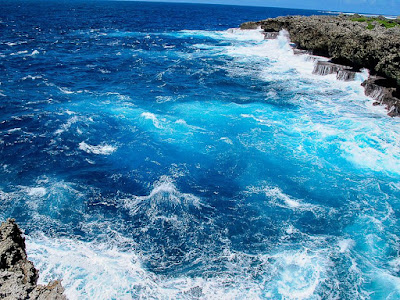 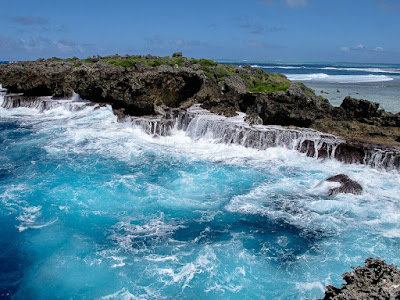