We met up with our friends on Manawai a few weeks ago to compare notes about our collective explorations in Tonga. They spoke highly of the island of Ha’afeva and recommended an anchorage on its North shore. The next time the winds were favorable, we set sail for Ha’afeva. As we approached the island the area had a different feel than anywhere we have been in Tonga’s Ha’apai island group. Ha’afeva is the largest of 8 or 9 islands all situated within a few miles of each other. Many were steep-sided with small hills and what looked like hardwood forest. This was in contrast to the many low-lying islands we’d visited lately which were totally covered with coconut palms. 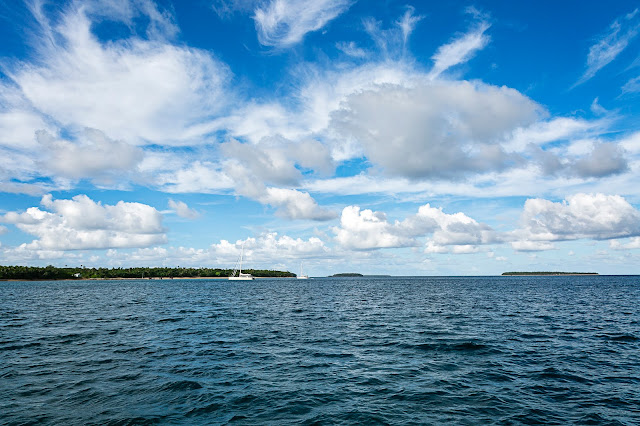 I had high hopes for this place as great for whales, because as we sailed along the reef nearing the anchorage a baby was tail slapping over and over!    I was hoping we would see whales everyday but we didn't.  We could hear them really loud when we went snorkeling, but never did see any more.  Below is a short video of it and some photos. 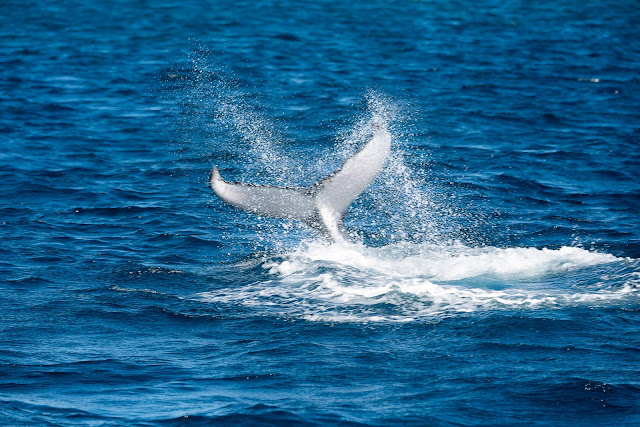 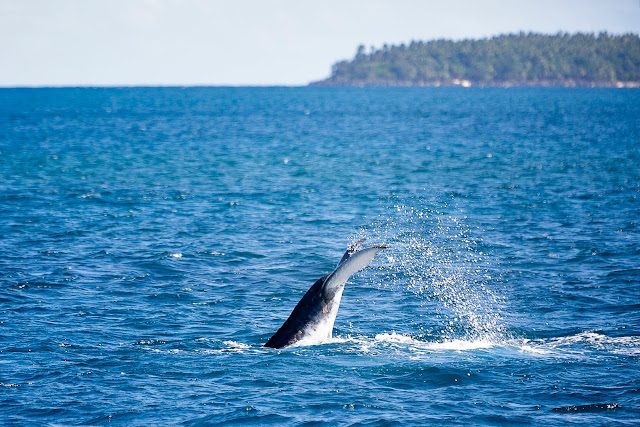 Three other boats were already in the anchorage. A large crowd for the Ha’apai! But there was plenty of room for more.

After anchoring we immediately took the dinghy into the beach to check the shell situation and get some exercise. It turned out to be one of my least favorite beaches in Tonga. Not much going on as far as shells, and crabs, or anything else.

The next day dawned unusually cold and overcast. The wind and seas were up as well but we were determined to get in the water and explore. We spent at least an hour zipping up and down miles of reef, periodically looking at the bottom with our bathyscope. We finally found a nice section of reef and snorkeled around till our core temps were getting low. The whale song was really loud at points, causing us to look around to see if they were hanging in the water nearby.

Our friends told us about a road on Ha’afeva that goes all the way to the other side of the island. They said it was a really lovely walk. 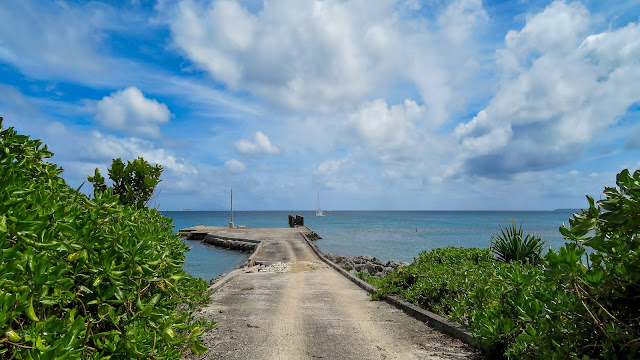 Our dinghy is at the end of this road. Looking out at the ocean.
The high winds and chilly temps made it seem like a good time to take a hike in the jungle. We packed some water, grabbed the smaller camera and headed in to the island. We didn’t know what to expect as we headed into the forest but after a few hundred feet we just stopped and stared. It was like another world. Quiet and dim and smelling of earth it was a magical tropical forest. There were lush fruit trees covered with flowers and climbing plants. There were a lot of tropical birds flying around with really loud calls we had never heard before.

At one point a patch of bright red color caught our eye a hundred meters off the trail. We walked towards it and found ourselves at the edge of an amazing swamp with tall trees covered with red blossoms. Fruit bats of all sizes were climbing around the upper branches eating the blossoms. We later identified it as a Flamboyant tree. The trees had buttressed roots spread out like wavy skirts. I have never seen them before and Rich explained they are to stabilize the tree in the water and soft soil. Nature’s lovely structural engineering. 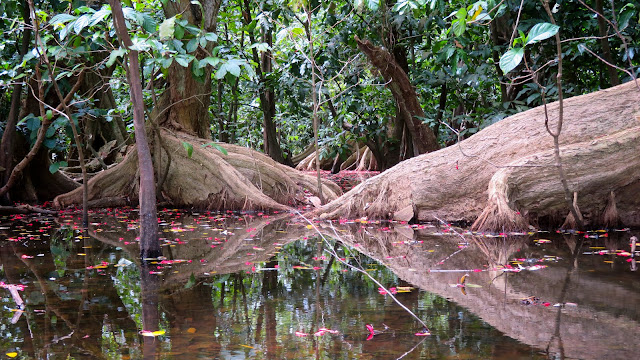 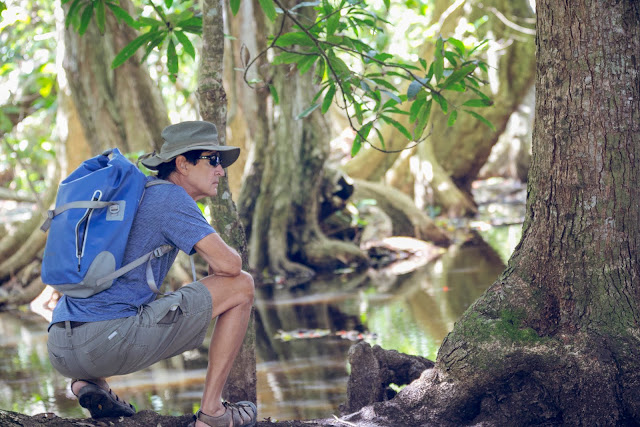 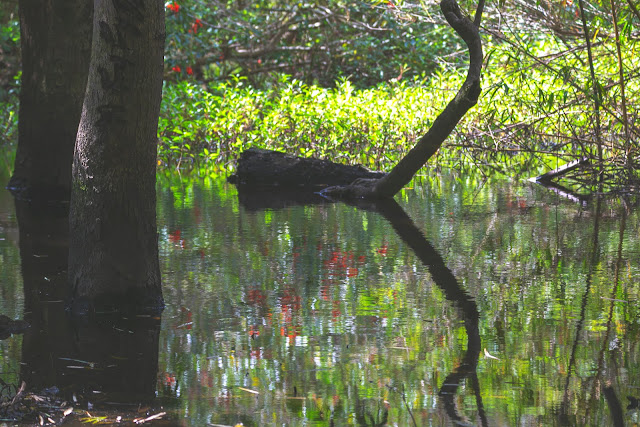 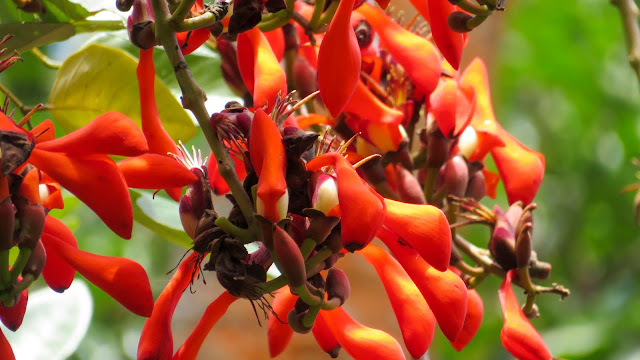 The bright red flowers of the Flamboyant tree were sprinkled on the water below along with some yellow leaves making a colorful display on the water. The water was like a mirror reflecting all the colors around us, reds, greens, yellows and browns. All over the place were bushes with long stalks that have tiny purple flowers on them. Black butterflies with white polka dots were everywhere. We stood there for a long time taking it in and came back the next day and did it all over again. 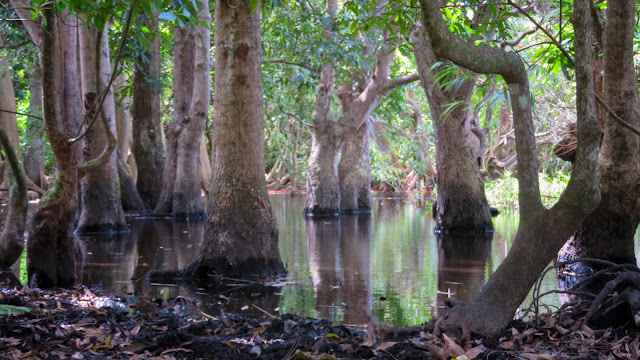 One thing we love about Tonga is the lack of mosquitos. Rich kept remarking on the fact we were standing by a huge amount of standing water with no bugs biting us.

As we returned to the trail and continued along we started seeing occasional pigs running around in the undergrowth and we could hear cows mooing in the distance. A bit further down the road we happened upon a bunch of cows crossing the road and munching grass. A fully-equipped bull was attached to one group and we went out of our way to avoid him. 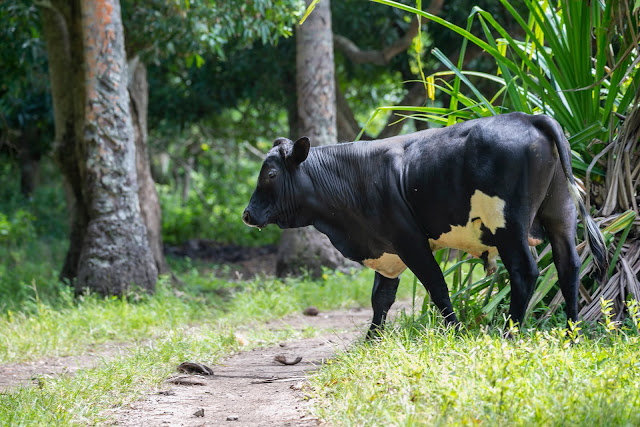 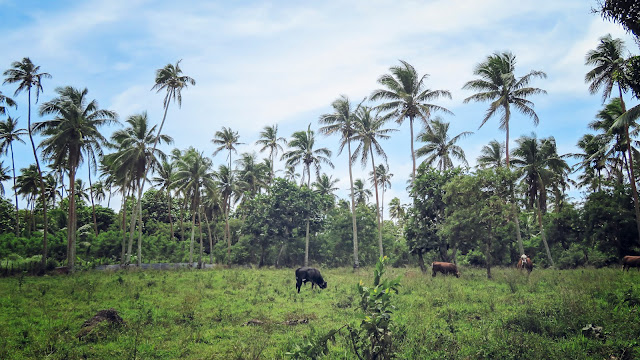 At one point a voice called out to us as we passed by a patch of banana plants with a high fence around it. I thought: “uh-oh, we’ve wandered onto someone’s land”. A small, weathered old man walked over to us with a smile on his face. He was talking to Rich in rapid-fire Tongan and we only recognized the word “banana” mixed in to the word stream. He went on for about a minute while we smiled politely. Eventually, after exchanging some gestures and nods it was obvious he was harvesting the bananas and wanted to know if we wanted a bunch. To further state his intent he grabbed a few samples, showed us how to peel them, and handed them over the fence. We had no money on us and offered to trade a large bath towel I used to wrap my camera. He was happy with the deal and passed us a large stalk of the best bananas we have seen in Tonga! I couldn’t believe how heavy it was. Poor Rich had to carry it over a mile back to the dinghy. 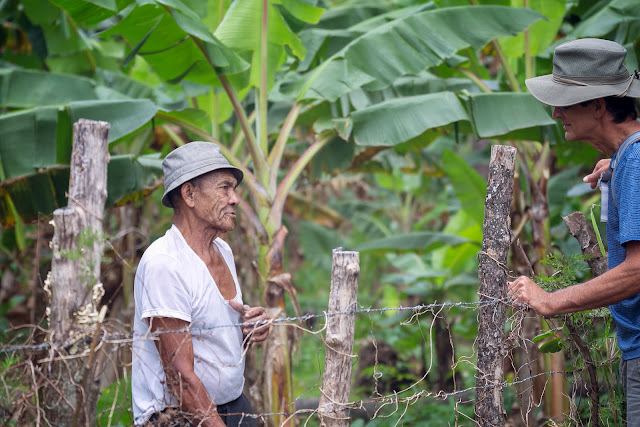 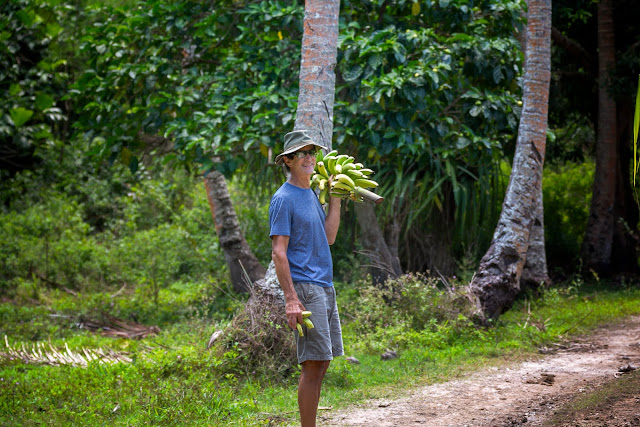 One other notable thing on our walk was the huge spiders in webs all over the woods. Rich had read about them so we knew they were harmless. But they were disgusting. They were by far the largest spiders I have seen. They have an egg-shaped bright green body and legs 2-3 times the length of the body. The species is Nephila tetragnathoides. Which is latin for “Eeeeewwwwwwwwwwww!”. 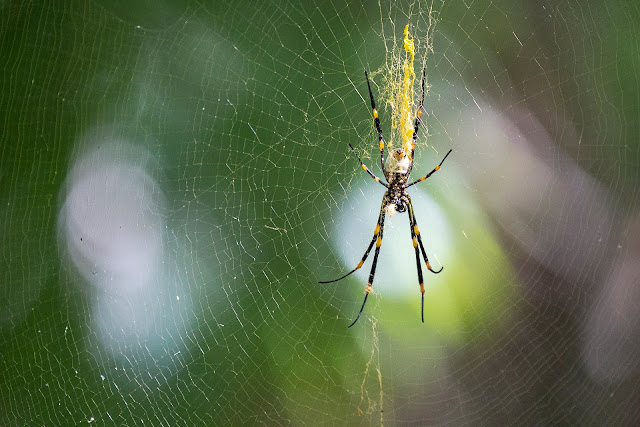 From the back of the boat we had a great view of the large volcanos, Kao and Tofua that are in many of my sunset photos. They are only 20 miles from Ha’afeva, making them look much larger. We are so used to seeing them in the distance as just smooth shapes. Kao is just what you would picture as a volcanic island. It’s a perfect cone sticking up out of the water about 3000 feet. At a few points the air was clear enough for us to see the ridges and vegetation running down the side. Nearby Tofua was the location of the real-life Mutiny on the Bounty. 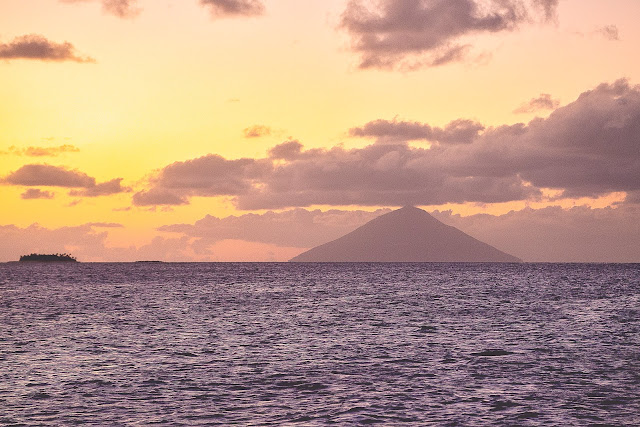 We seldom got hot in Tonga.  It is much cooler than Fiji.  During our stay at Ha'afeva it was often so windy and cool we thought twice about jumping in the ocean.

We took the dinghy all over looking for good reef.  We finally found a couple of healthy coral heads but the top of them was at 20 ft depth.  I like shallower water since there is more light for photography.  The whale song was soooo loud.  I was sure we would see a whale swim by at any moment.  Rich took the camera down deep and recorded video to capture the whale song.  The video is at the end of this post. 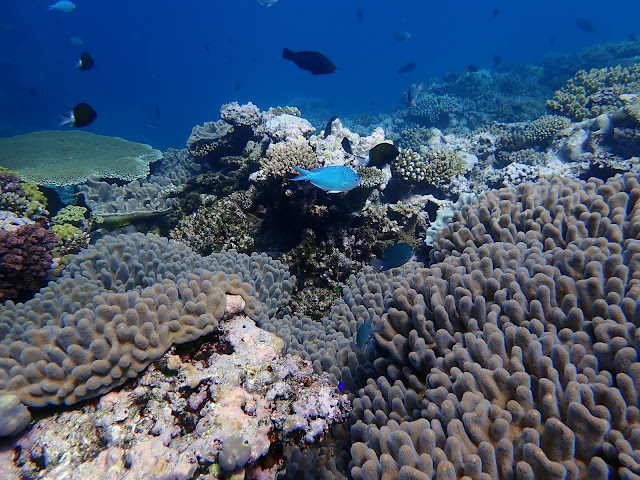 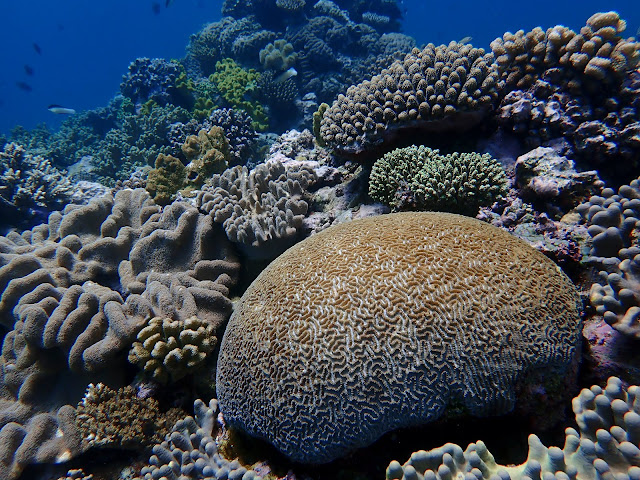 Below are two short videos with whale song.  The video was the only way to record the sound, but there isn't anything to watch.  The water is kind of murky and the day was overcast.  That is how it was the day I swam with the whales.  There is an eerie anticipation of knowing these huge creatures are close and could appear at anytime.

Notice the crackling sound?  It is always there.  We think it's a type of shrimp.  When we are in still water at marinas we here this same crackling as little creatures try to attach to our hulls.  It is non-stop.  Snap-crackle-pop!  It sounds like amplified rice krispies in milk.